A photographer captures a photo of a rare Siberian tiger 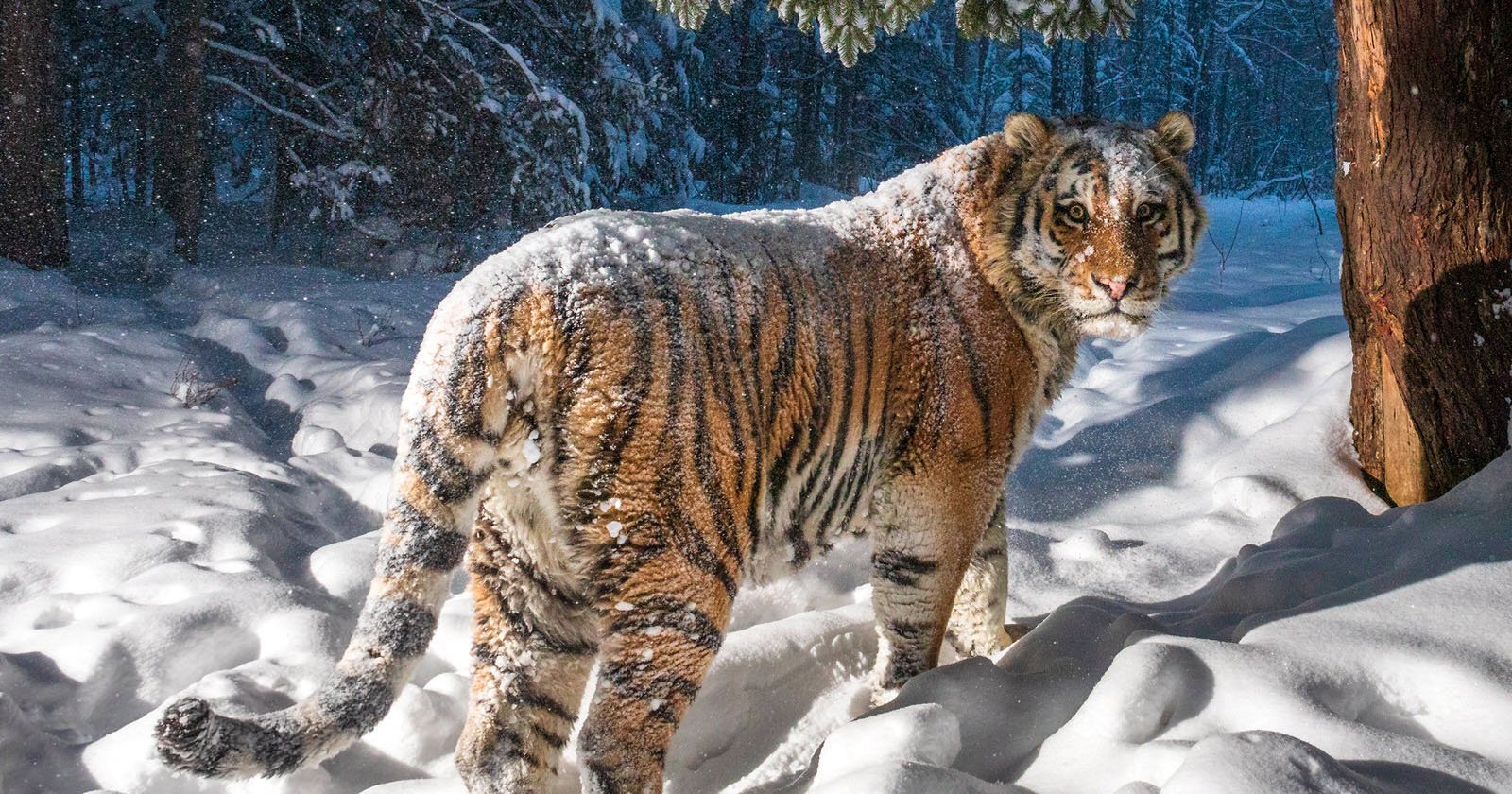 Wildlife photographer Sascha Fonseca has captured an incredible photo of the ultra-rare Siberian tiger in its snowy natural environment.

Fonseca had carefully set a camera trap in December 2021 in the forests of Russia’s Far East in hopes of catching one of the endangered cats. Luckily for the photographer, a large male tiger happened to walk right past the camera.

The resulting flash-lit photo shows the Siberian tiger pausing and staring into the lens as snow falls in the quiet forest.

“A male Siberian tiger walked past my camera trap deep in the forests of Russia’s Far East,” says Fonseca. “It turned out to be an unknown man who has not yet been documented. So the researchers I’m working with on my camera trap project asked me to give it a name.

While thinking of a name for the newly discovered creature, Fonseca noticed a peculiar mark on it that made a name pop into his head.

“We settled on ‘Leo’ because of the distinctive L-pattern on his left cheekbone, and after famous Russian writer Leo Tolstoy,” the photographer explains.

The moment the tiger entered the frame

A second nearby camera captured footage of the moment the Siberian tiger walked past Fonseca’s camera and turned to look at what caused the flashes and shutter sounds.

The Siberian tiger is critically endangered

The Siberian tiger is a subspecies of tiger found primarily in the Far East of Russia, northeast China, and North Korea. Other names for the Siberian tiger include the “Amur”, “Korean”, “Manchurian” and “Ussurian” tiger – which name to use depends on where the tiger is spotted.

Once common in northeast Asia, widespread poaching of the Siberian tiger and the prey it feeds on has pushed the animal to the brink of extinction. It is estimated that fewer than 400 individuals remain in the wild.

“About 350 to 400 adult Siberian or Amur tigers are left in the wild, with 95% of these individuals inhabiting the forests of the Russian Far East, where they play a vital role in both the ecosystem and local culture,” writes the Wildlife Conservation Society. “The tiger is a keystone species that requires large, intact forest ecosystems and acts as an indicator of overall ecosystem health. […]

“Although poaching levels reached around 60-70 tigers per year in the early 1990s, today Russian and international conservation efforts have succeeded in stabilizing the number of Amur tigers in the wild. However, significant threats still face this population and the Amur tiger remains critically endangered.

“The very fact that there are wild Amur tigers in the world today is a miracle,” says Fonseca. “Only 3-4% of an Amur tiger’s range area is protected by wildlife sanctuaries and national parks.

“Habitat loss, logging and mining, poaching, hunting and a shrinking gene pool – the world’s largest cat clings to existence amid a host of interconnected issues.”

However, Siberian tigers are not the only ones at risk: tigers as a whole are endangered and are on the International Union for Conservation of Nature’s Red List of Threatened Species, and are believed to be endangered. There were fewer than 4,000 mature individuals worldwide in 2015. Countries and organizations have launched new initiatives in recent years to protect the tiger, and the global tiger population has since grown to around 5,500 or more.

Picture credits: All photography, unless otherwise stated, by Sascha Fonseca