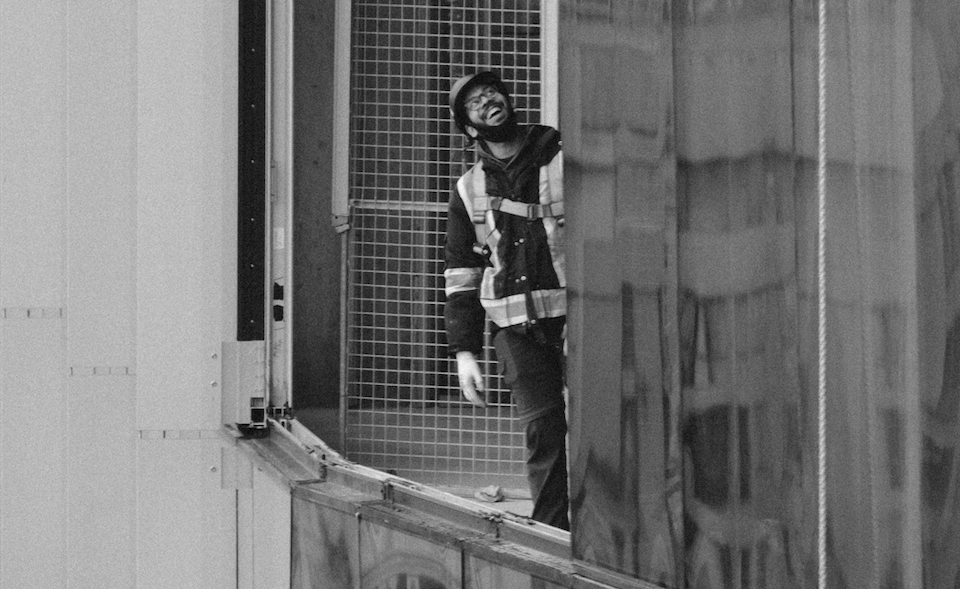 United by a beaming smile and the faint click of a camera, two Vancouverites created a magical moment on an otherwise dreary day.

But the photographer wasn’t sure he’d ever get the chance to connect with the man in the photo.

In a previous interview, the artist Raphael Esiriel told Vancouver is awesome the workers were installing window panes and one “caught my eye…he was really enjoying the moment and his smile was so contagious.”

The construction site was the Vancouver Center II — a 33-story office located downtown near the intersection of Georgia and Seymour.

It was an “awkward moment” as workers were dragging huge glass windows on a rope from outside and the worker below the one pictured had to grab it and install it without breaking anything, a explained Esiriel. “[It’s] It’s not everyday you see a guy so close to the edge, so high.”

The photographer added that he hoped the worker could see the photo, noting that he thought he saw him taking pictures of another building “but there was no way to communicate”.

After VIA published the story of the worker with the “bright smile”, one of his colleagues reached out to say he recognized him from the photo.

Oscar Lopez, 32, has lived in Vancouver for four years and worked in the window installation business for almost three years. Although he now feels at home working at height, he hasn’t always felt comfortable navigating soaring structures.

“You don’t have to look down,” he remarked in a phone interview. “You can feel it in your stomach…like a roller coaster if you look down.”

Although he might still feel a little annoyed when looking down, he added that he wasn’t really afraid to walk through tall buildings after about six months.

Lopez, originally from Merida, the vibrant capital of Mexico’s Yucatán state, first came to Vancouver on vacation and fell in love with the city. After going to school, he got his first job installing windows at the Park Royal Towers in West Vancouver.

Although he admits that the job is difficult (any kind of knock on the glass breaking it and wind can be a big problem), he credits his good relationship with his co-workers as the reason he loves his job.

“When the picture was taken it was raining…but the job needs to be done and I was happy,” he said. “The hardest part is getting the layout done. Once you have that, the rest is a breeze.