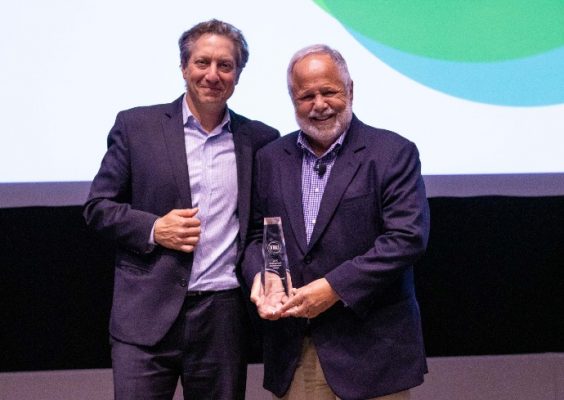 Administrator and Syracuse University alumnus Larry Kramer ’72 had a legendary career as a journalist, media executive, and entrepreneur. His award-winning career included more than 20 years as a reporter and editor for the San Francisco Examiner and the Washington Post, and overseeing staff that won two Pulitzer Prizes. As an entrepreneur, he was founder, CEO and chairman of MarketWatch Inc., first chairman of CBS Digital Media and former chairman and publisher of USA Today.

Administrator and alumnus Larry Kramer ’72, right, received the Society for Advancing Business Editing and Writing’s Distinguished Achievement Award from Caleb Silver, left, president of SABEW and editor-in-chief of Investopedia, during the annual SABEW convention on May 13. (Photo courtesy of SABEW/Victor G. Jeffreys II)

Kramer’s multifaceted career and significant impact on the media industry has been recognized with the Society for Advancing Business Editing and Writing (SABEW) Distinguished Achievement Award, its highest honour. Kramer received the award at SABEW’s annual convention in New York City on May 13. The award is given to an individual who has had a significant impact on the field of business journalism and has had a nurturing influence on other members of the profession.

Following the award, Kramer shared his thoughts on his career with Brian Sozzi, editor and anchor at Yahoo! Finance, who was mentored by Kramer at TheStreet earlier in his career.

“They (Larry Kramer and David Calloway) saw something in me and then promoted me to editor where I would lead a team of reporters,” Sozzi said in a recent Twitter post. “They mentored, encouraged and pushed me to win Grand Slams. Above all, they let me know when I missed the mark so that I could improve.

Sozzi spoke about some highlights of Kramer’s long and distinguished career, including photographing the Woodstock Music Festival, delivering stories during the October 1989 earthquake in San Francisco, and creating MarketWatch and the modern USA Today.

“He has mentored and discovered hundreds of journalists you know, love and follow every day,” Sozzi wrote. “Hell of a human being. Proud to be a graduate of his school. H/T over to you. My friend.”

Kramer says the award was a pleasant surprise. “I am truly honored to receive this award and to join the list of previous winners whom I have admired near and far throughout my years as a journalist, editor, entrepreneur and media executive,” said he declared. “This comes at a time when we must particularly celebrate business journalism in its role as a watchdog of business and government and in the constant search for truth. SABEW has always held our profession to the highest standards. C t is an honor to join those cited for their extraordinary work and for the example they set for those who will follow us.

“Larry Kramer is a visionary journalist, entrepreneur and teacher,” said SABEW President Caleb Silver, Editor-in-Chief of Investopedia. “He created several important business journalism platforms and organizations that are still going strong today and led several others to new heights. Beyond his business accomplishments, he has been an inspirational mentor, teacher, philanthropist and industry friend throughout his incredible career.

His life’s journey began in Syracuse

Larry Kramer shares his thoughts on his career with Brian Sozzi, editor and anchor at Yahoo! Finance, during the annual convention of the SABEW. (Photo courtesy of SABEW/Victor G. Jeffreys II)

The seeds of Kramer’s legendary career were planted at Syracuse University, where he majored in journalism at the Newhouse School of Public Communications and political science at the College of Arts and Sciences and the Maxwell School of Citizenship. and Public Affairs.

While at Syracuse, Kramer says he learned as much outside of the classroom as he did in it. He has written for The Daily Orange and was one of the founders of The Promethean magazine.

Kramer learned an important lesson about toughness in his senior year. He took a magazine writing course designed to give students a foundation in writing for freelance opportunities. He wrote an article, “The Grass and Hash Business at Syracuse University”, which was about drugs on campus at that time (early 1970s). The professor gave him a B+, and Kramer thought he deserved a better grade. “See if you can sell it then,” the professor told him.

He did just that and sent it to major publications. While he received more than 25 rejections, he got one acceptance that mattered…Fortune Magazine. Fortune edited his article (he was the youngest author to have a byline in the magazine) and paid him $2,500, which covered Kramer’s tuition for the semester. Shortly after, he received a phone call from Rolling Stone upstairs at his residence, asking him to publish the story as well. He received an additional $2,500, covering his tuition for the entire year.

“It was a lesson for me in tenacity and how we have to make our own breaks,” Kramer said. “It’s a subjective matter – you can never give up.”

For Kramer, taking advantage of these breaks has led to some incredible experiences. A chance call he took while sitting on the DO’s city desk landed him working as a freelancer for The Associated Press (AP) and put him on the scene when a photo Pulitzer Prize winner was taken to Cornell University. This paved the way for a summer internship with the AP, which led to him being the first photographer to capture images of Woodstock in 1969, photos that made the front page of Life Magazine.

After earning an MBA from Harvard University, Kramer began working at The Washington Post in 1974. Upon his arrival, its new editor shared what impressed him most: “Your incredible ability to land the feet first in the midst of great stories”.

“These are lessons I learned in Syracuse that have paid off for me my entire life,” Kramer says.

A love of mentoring

Kramer shares fond memories while reflecting on his career and the people he worked with. “I never had a job that I didn’t like,” he says. One of his greatest joys was having the opportunity to mentor young journalists. Journalists who worked for Kramer in their early years included Poppy Harlow of CNN, David Remnick of The New Yorker, Kara Swisher of The New York Times, and the late Gwen Ifill of PBS. He served as an assistant instructor at the Newhouse School and has been a lecturer at several universities, including Harvard Business School, University of Pennsylvania, University of California, Berkeley, New York University, University of Columbia, Stanford University and Emory University.

After more than five decades in the industry, what advice does Kramer have for up-and-coming journalists and entrepreneurs? “Make your own breaks and aggressively follow your instincts,” he says. ” Do not be discouraged. Try something. If you get knocked down, get up and try again.

It also encourages talking to people at their level and listening. Spend time. Be determined, persistent and do your research. Be curious. “Do the job you have been given and do it well. That’s how you end up doing the stories you want to do,” he says.

SABEW is the world’s largest association dedicated to business and financial journalism. The SABEW Distinguished Achievement Award was created in 1993 when it was presented to Hobart Rowan of The Washington Post. There have been 28 previous recipients.