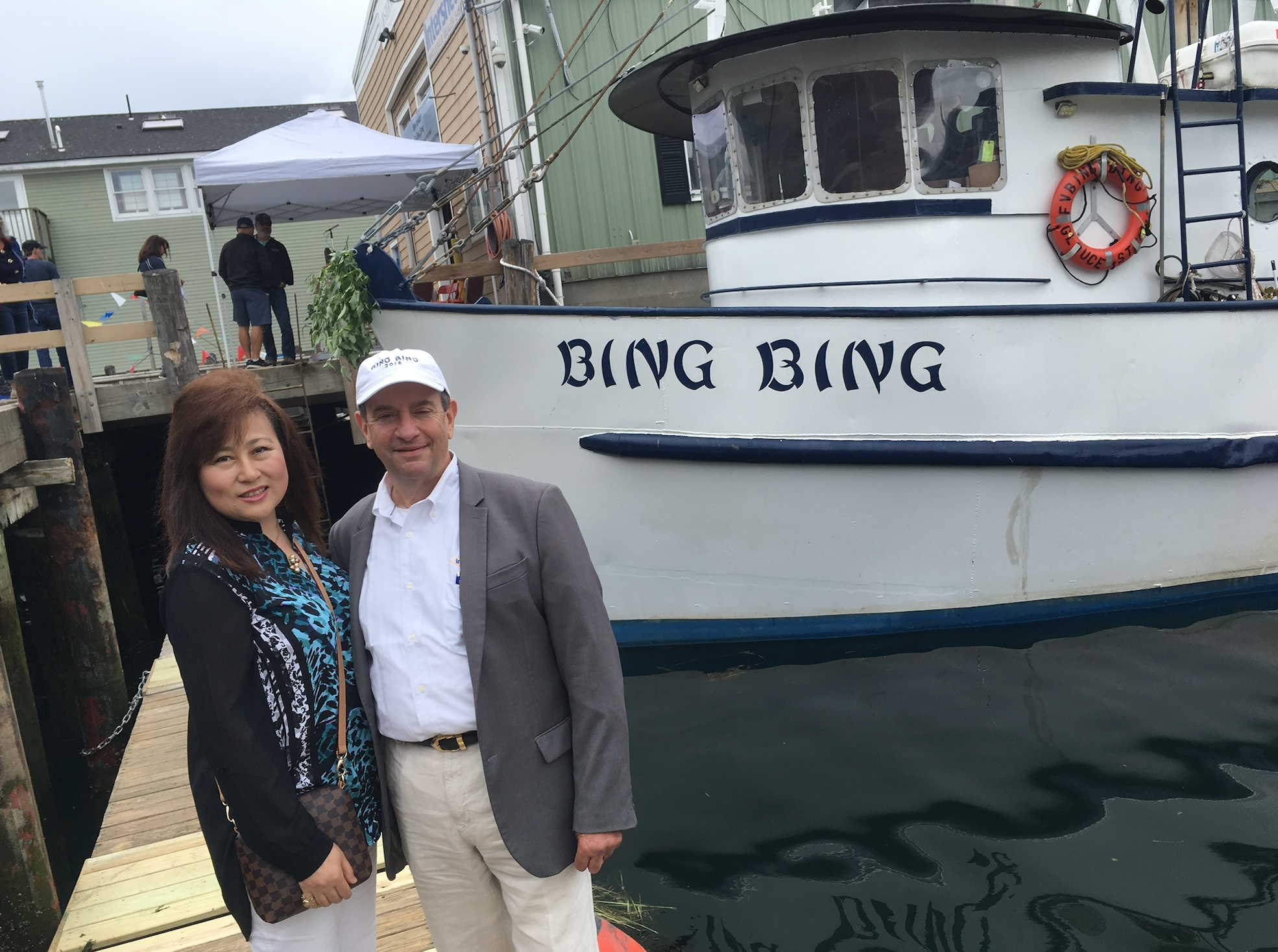 [Editor’s Note: This story ran in NF December 2018, after the Bing Bing was overhauled.]

Few ports are as identified with the American fishing industry as Gloucester, Mass. Agawam, a Native American fishing village, existed for thousands of years at the head of Gloucester Harbor before English settlers moved there in 1623. In the years that followed, Gloucester hosted the best times of New England cod fishery and ranked in the top 10 US ports for landings until 1989.

While the iconic Fisherman’s Memorial statue – a fisherman in his raincoats holding the spoked helm of a schooner – still identifies Gloucester’s fishing heritage, since 1993 the town has fought to keep its economy in line with its image , and this fight continues. On July 23, 2018, under cloudy skies, Monte Rome, owner of Gloucester-based Intershell International Corp., and some of the city’s leading figures gathered to celebrate the launch of Rome’s new clam boat, the Bing Bing, and more.

“It’s not just a question of the boat,” explains Rome. He stands with the freshly painted 55-foot white ship behind him, stretching his arms out to the crowd and inviting them to feast on deli food and free beer. “It’s to honor the people and business people in this town who made this possible,” he says. Essex Clambake has introduced a range of seafood dishes, including Rome’s signature stuffed clams recipe. “I just want to mention, maybe I shouldn’t, I don’t know,” Rome said. “But a recent study found that couples who eat more seafood have more sex.” Everyone laughs and groans.

The Bing Bing floats alongside the interhull quay, fully rigged and ready to start fishing. Built in 1977 by James K. Walker Marine in Moss Point, Mississippi, as a clam dragger, the then Paula Jean had been transformed into a scallop when Rome purchased her from New Bedford in 2017. Rome brought the boat to Gloucester’s Rose Marine and began a massive rebuild.

“I have rebuilt a lot of boats, but never like this. We took it back to bare steel. Everything about her is new,” Rome says, showing me around the boat, starting with the deck plan. “We can put six cages in the clam tank,” Rome says, looking down into a larger open pit that can be flooded to keep the clams cool. “And having eight on deck,” he adds. “It’s a tractor-trailer load.”

Rose Marine welders rebuilt the hull, with parts manager Marty Balcome handling the specification of many of the systems and finishing work on the hull. “He knows everything,” says Rome. Guy Crudelle of Gloucester installed all new power systems based more or less on the original design. “We knew the speed, the horsepower, the gear ratio, so we remade it based on those specs,” Crudelle says.

In the engine room, dominated by a new 405 hp Caterpillar 3406 main engine and a 210 hp Cat 3306 that will run the 3,500 gallon per minute pump that sends seawater to a manifold through the mouth flirting. “It thins the sand,” Rome says, “so it’s easier to get the clams out.” Stepping into the engine room, he smiled proudly. “Look at this hydraulic system,” he says, pointing to a set of valves. “Pine Hill did that. It’s state of the art.

A 30 kW Next Gen generator provides electrical energy. “Compass Marine’s Joe McGinnis did all the wiring, and he also installed all the electronics,” Rome explains. Vito Ciaramitaro did the finish carpentry. “He did all the crew quarters, the wheelhouse, everything,” Rome says. “It was a lot of work. So many carpenters I know, they make a boat and say ‘never again’. But he was awesome.

An unusual aspect of the design becomes apparent when Rome exits the engine room into the crew quarters. The hatch opens across the deck, just below wheelhouse access, and if it ever had to be opened when someone came down without looking, it would be a long, hard fall. “I’m going to have to keep this locked down,” says the Bing Bing’s new captain Paul Hunt, who, with his daughter Denise, stands in the wheelhouse admiring the array of displays, including a Furuno radar and depth sounder, a Nobeltec Navigator plotter and two GPS devices.

Hunt and his crew will tow their hydraulic clam dredge at depths of up to 30 fathoms. The 350 foot long, 6 inch pump hose feeds the manifold with jets which help force the clams into the dredge. “We tow at about 1.5 to 2 knots,” says Hunt. “The dredge is coming here,” he adds, pointing to a starboard boom and winch. The clams are thrown into cages and placed in the clam tank and rinsed with cold water drawn through a 60 foot inlet hose that reaches well below the surface. Once he’s filled the tank with clams, Hunt and his crew stack the cages on deck and douse them with deep-draught seawater. “I just hope we can find a product,” he says.

Maintaining access to productive fishing grounds is part of the reason Monte Rome, whose company ships products around the world, has gathered the Mayor of Gloucester and other political figures here. “We’re nervous about the regulations,” Rome said. “This essential omnibus modification of fish habitat could shut us down.” Rome is concerned critical habitat could include the sand bottom around Stellwagen Bank and other areas vital to its business plan, and it wants to make sure local decision-makers know what’s at stake. Others Problems include red tides and contamination of clams with plankton that causes paralytic shellfish poisoning and could further reduce available fishing grounds. “Between Provincetown and Gloucester lies one of the most sound bottoms around,” says Rome.

The surf clam fishery was one of the first fisheries to fall under individual transferable quota management in 1990, and Rome has a quota to keep most of its boats in operation. But with the Bing Bing, he hopes to target Stimpson’s clams, also known as Arctic surf clams, which are found in harvestable quantities on Stellwagen and the northern edge of Georges Bank. While surfclams and quahogs fall under the QIT program for sea clams, Stimpson’s clams have no such restrictions. Rome just needs access to the bottom.

According to its summary, the Omnibus Essential Fish Habitat Amendment 2 “revises designations of critical fish habitat and habitat areas of concern, revises or creates habitat management areas, including gear restrictions , to protect vulnerable habitat from the impacts of fishing gear, establishes dedicated habitat research areas, and implements several administrative measures related to the revision of these measures, as well as other regulatory adjustments to implement Although it allowed a one-year exemption for sea clam fishermen, the amendment could put a damper on Rome’s business plan and further affect Gloucester’s seafront.

In early October, Rome reports attending the September meeting of the New England Fishery Management Council with positive results. “We went to [Plan Development Team] meeting before that. We had about 12 clam fishermen there and we showed them eight years of tracks where we fish,” he says. “Our argument is that nothing else lives there. This background is constantly changing, it’s just waves of sand. Rome is confident that with the information provided by the claimants, counsel could extend the exemption.

Clams are not overfished. “We haven’t reached the quota for years,” Rome says, largely because of the condition of the vessels. It used to be a hundred, now it’s closer to 30. I spoke to another guy, he can barely run his boats.

Nonetheless, Rome is expanding its fleet and is being hailed as an example of the kind of seafood businessman who is bolstering Gloucester’s waterfront. Speaking at the Bing Bing launch party, sensible Gloucester Mayor Sefatia Romeo-Theken told the crowd that Gloucester is not leaving.

“Those of you who work in the trades, watch your hands,” she said. “We are not afraid of work. Like other speakers, State Senator Bruce Tarr and US Senate candidate Beth Lindstrom, Romeo-Theken praised Rome’s courage and tenacity, as well as her contribution to the city’s fishing industry. State Representative Ann-Margaret Ferrante also praised Rome for following a longstanding tradition of naming boats after strong women.

“My wife is Yi Bing, our daughter is Rose Bing. It’s the most beautiful boat I’ve ever built, and I built it for them,” Rome says. At the end of the event, Yi Bing Gao-Rome smashes a bottle of champagne on the bow and everyone cheers, I grab two of Rome’s last clam cakes for the road and head home.

Inside the Bing Bing

Heat the oven to 350 degrees. Brown the onion and the pepper in a tablespoon of oil, season and remove from the heat. Stir in clams, juice, eggs and butter until blended. Then add the crackers and breadcrumbs. Divide into 12 clam shells and bake on a baking sheet or in a muffin tin for about 20 minutes or until golden brown. Garnish with paprika and serve hot. Makes about 12 6-ounce stuffed clams