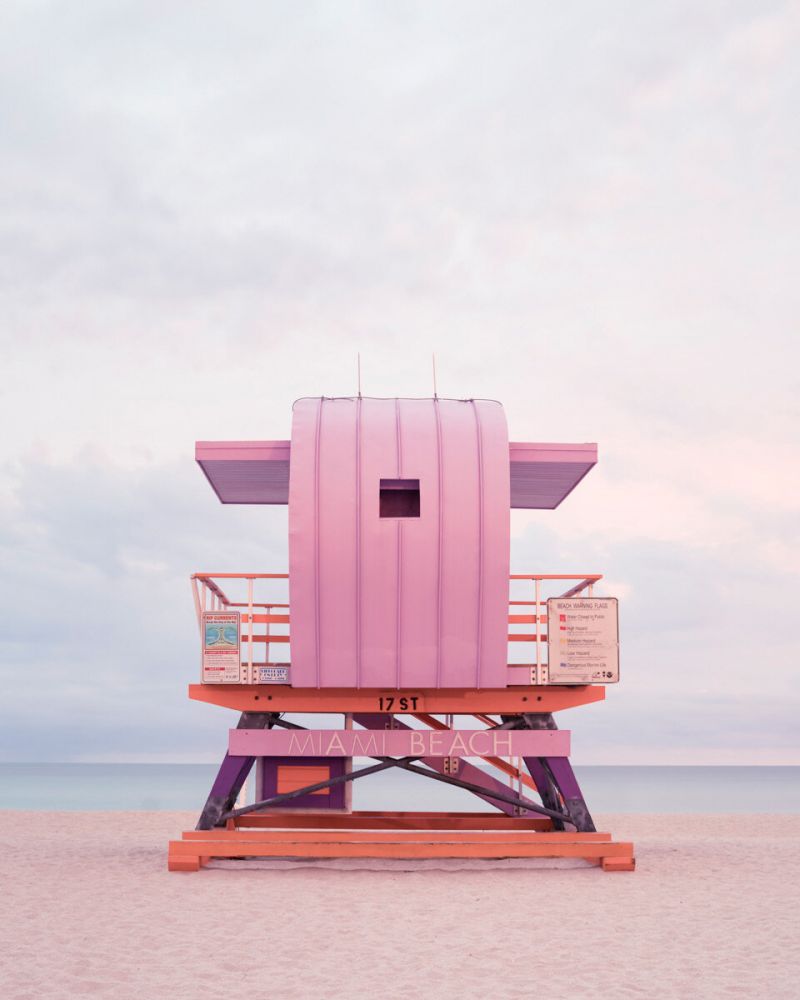 When Hurricane Andrew hit South Florida in the early 1990s, the damage it left in its wake was immense. Among the devastation, it completely obliterated Miami Beach’s original lifeguard towers. It was in 2015 that the City of Miami began building 35 new wooden structures to protect its beaches. Conceived by William Lane, the rainbow-colored towers are built in batches and brought to their new home on the sand when complete. The final five are currently in production, adding to the existing lineup that has become iconic and frequently documented by Instagrammers around the world.

New York photographer Tommy Kwak shares their fascination. He’s been photographing Miami Beach’s candy-colored lifeguard towers since 2019, slowly weaving his way along the 8.5-mile stretch of sand to document them all. His goal was to create a catalog of these fascinating structures to highlight the unique features of each tower. Looking through his images, you can see how he transforms these towers into more graphic forms, bringing a new perspective to what have become popular public works of art.

“I love being near water, and most of my photography has an aquatic element to it, whether it’s traditional seascapes or more abstract interpretations of waves,” Tommy told Creative Boom. “Also, I love bright, vibrant colors, which is another part of my photography. And finally, I tend to be drawn to isolated, solitary forms, whether it’s a stop bus stop in the middle of nowhere, a lonely tree, or In this case, a lifeguard tower against a backdrop of water. So when I first came across the towers in Miami Beach a few years ago, these three things came together for me and attracted me.

Tommy had no idea how popular his series would become, attracting likes, sales and media coverage around the world. “A lot of people comment on the clean compositions and framing and the bright colors, which seem to bring a lot of joy, so I’m really happy with that,” he explains. “Initially they got a lot of attention on Instagram. Then collectors started acquiring prints and later NFTs from the towers.”

To add to his success, Tommy is collecting the photographs in a new book, Lifeguard Towers: Miami, currently seeking support on Starter. Published by Blurring Books and featuring an introduction by New York editor Karen Quinn, the hardcover book will feature 42 photographs and will go on sale in time for Christmas. “If the funding is successful, it will help bring the images to a wider audience in a more intimate form,” he says.

Tommy Kwak began exploring photography in 2006 when he moved from Chicago to New York. “I mainly did street and documentary-type photography, taking my camera everywhere with me,” he explains. In 2008, when he visited Iceland – the first of 12 trips there – he turned to landscape and nature photography. Later, he discovered the Miami Beach Lifeguard Towers, starting a streak that lasted three years. “I’m a big fan of Miami. I love the beach and the warm waters, the amazing food and the relaxed atmosphere. Plus, it’s only three hours by plane from New York, so it’s great to escape during the winters.

Does Tommy have a favorite trick? “I love 1st Street, 8th Street and the 100 Towers because in these photographs I achieved what I was looking for, which was a very reduced sky and water background, so the palette of electric colors and the eccentric shapes of the towers stood out, transforming them into graphic shapes.”

To help bring Tommy Kwak’s Lifeguard Towers: Miami to life, check out his Starter campaign. Or you can follow Tommy on instagramwhere he frequently shares his shots of colorful landscapes.