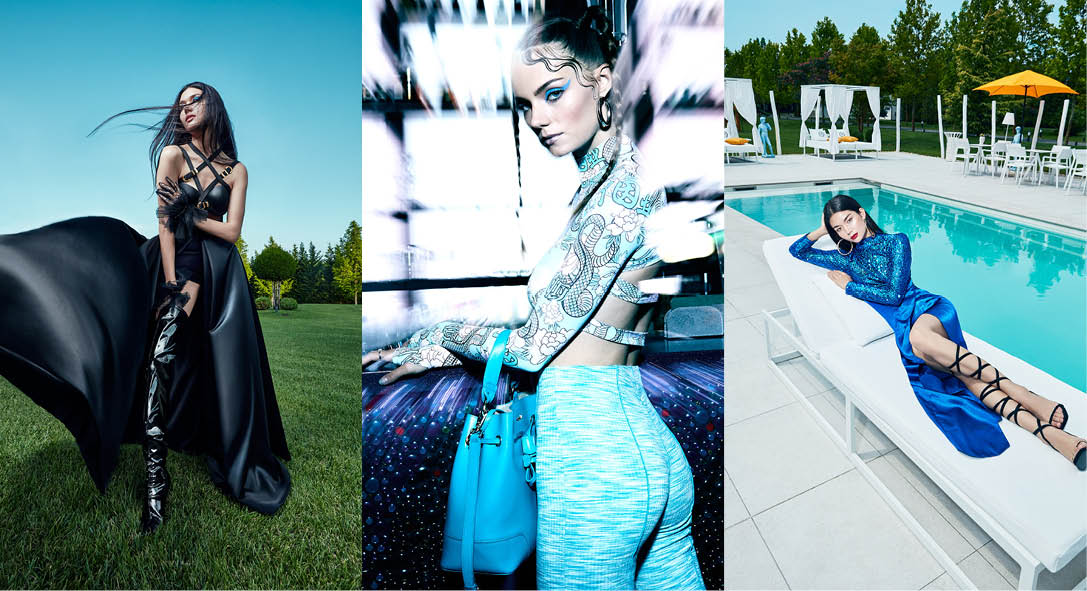 Fashion photography is about, well… fashion. As simple as it sounds, many photographers are still caught up in the technical details without paying too much attention to the subject. In this article, I’m going to go over some of the most common fashion terms that every photographer should know when working with fashion.

Keep in mind that this is only a small part of what you need to know. As this is a photography-focused post, these are defined as much as possible through the lens of the photograph.

Why is this relevant for photographers?

You might be wondering what fashion terms have to do with photography. Indeed, it is nothing related to the camera. Yet, did you start photography because you liked the camera or because you liked what you could photograph with it? The “what” part is crucial but gets lost in discussions about the equipment. I encourage you to learn more about the genre you operate in!

Without further ado, let us in directly.

Short for “bohemian,” this is a free, relaxed and flowing style popularized by “hippies” in the 1960s and 1970s. It is generally a good idea to highlight movement and flow with fan machines. Light can be used to further bring out the free flow of the design.

Edges defined in the shape of a box on a garment. The silhouette of the garment is important because the person wearing it becomes androgynous. A perfect starting point for blending gender boundaries through styling, makeup and fashion photography. 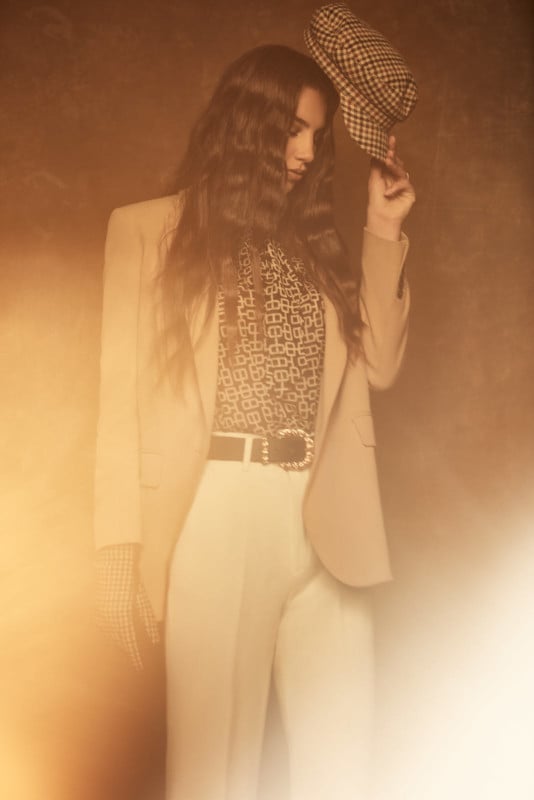 Usually an outdoor fabric made from heavy cotton yarn. Excellent source of texture and detail in your images. The harsh light associated with the canvas can produce fine details that catch the eye.

A soft, very fine and delicate fabric. You can use the softness in your image to further highlight the cashmere.

A soft but textured fabric that will be a great source of texture. An interesting way to photograph the caterpillar would be to use uniform but harsh light. This way the deep color, as well as the texture, will be visible.

A personal favorite. Slightly rough texture but colorful fabric ideal for showing color transitions and rich saturation. A slight sheen makes the fabric all the more attractive. There is a risk of having moiré when working with muslin.

A dress style considered timeless. An example would be a white shirt and black pants. The eye is used to these styles, which makes it a bit more difficult to produce a style-fueled image. The use of an unusual light, or the pose can however compensate.

Much like the yacht rock, it is soft and relaxed. If you work with beach fashion, look no further than cruise clothing. Here you may find it beneficial to imitate sunlight or have a very vivid color palette.

While not a style, this term refers to wearing clothes from styles that usually don’t go together. The eclectic style combinations create very interesting images that easily capture the viewer’s attention.

A movement to push trends to their limits. A daring designer could create a corset meant to be worn over a dress. I suggest being careful with such clothes as they can get too edgy at times which can negatively impact your overall voice.

Another term to describe the full outfit. Consider the geometry, color, and pattern of each set and build your light around the set.

A style that is a few seasons ahead of its time. In general, photographers tend to avoid it because it makes their work obsolete. Nonetheless, having a few cutting edge imagery can go a long way in making touring work more unique.

Not to be confused with chiffon, georgette is thicker and heavier. It will not transmit light as well as chiffon. Nevertheless, the feel is still very similar, so you can use the same light for the georgette as for the muslin.

Flashy and shiny clothes. The 90s were especially known for the glam looks that are now making a comeback. When working with glam, pay extra attention to highlights and explore things like star filters to bring out the sparkle more.

French for “haute couture” means haute couture. High-end, individually manufactured parts that exist in a single quantity. A favorite among many photographers.

Low edge of a dress, or any other item of clothing. As the model moves, you can observe the hemlines to explore movement or static in your photo.

If it’s trendy, it’s trendy. Fashionable clothes tend to go out of style as quickly as they get fashionable. As for the editorial, these are the most time-sensitive pieces to photograph.

When the garment changes shade or color as it interacts with different lights. Go unusual and try to bring out that iridescence. Chiffon or sequins are great examples.

Pointed pleats typically found on skirts. The mixture with a hard light creates a fantastic contrast on the garment.

Term describing a gradient of colors in the dress. A combination of graduated gels can make this element stand out.

Similar to in vogue, but refers to a larger general trend, such as ripped sweatshirts in the 1980s. The most attentive photographers will pay attention and include relevant images in their book.

Much like music, it involves a lot of leather, ripped fabric, and chains. A frontal flash will further bring out the urban roughness element of this style. 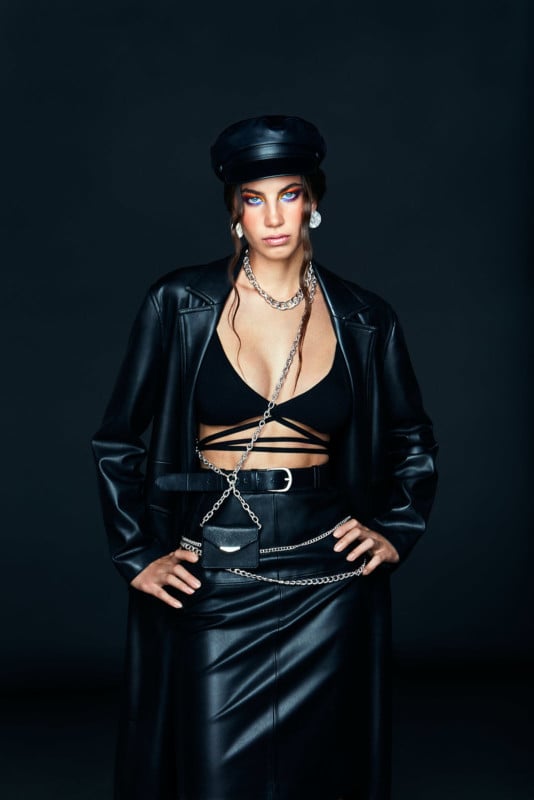 Loose clothing, but not oversized. Because they conceal the body, you can explore androgynous patterns in a casual dress style.

The shape or outline of the garment.

A smooth fabric that shines. Due to its rich color, it is often a staple of sophistication and high-end clothing.

High-end parts. They highlight the gender of the wearer without being cliché about it. A style to photograph with a serious pose, a sophisticated scenography. 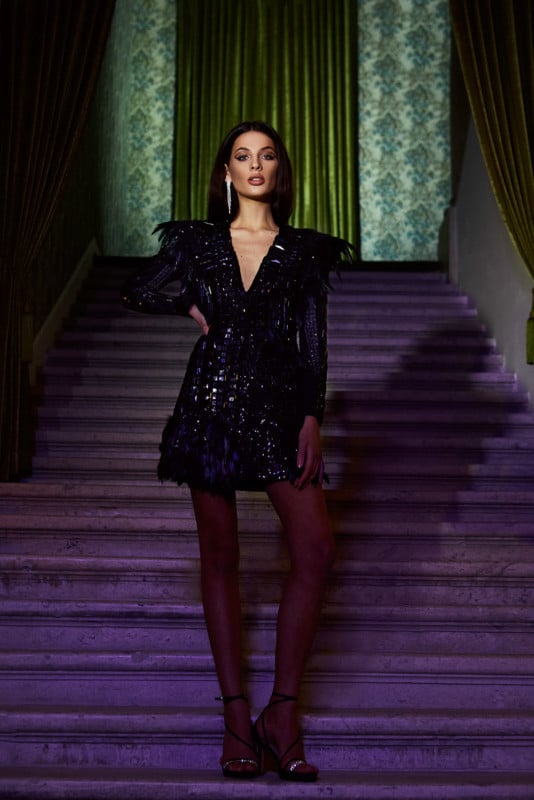 Active clothing, often tight. The silhouette of the wearer is key. A dynamic pose, with a light showing the wearer’s body, is helpful here.

High-end clothing designed to fit the wearer. It is important to show how perfectly the garment fits. Every detail, curve and shape should be captured in a way that showcases the perfect fit.

An often soft luxury fabric. Black velvet is one of the most difficult fabrics to photograph. It’s a good idea to use parabolic modifiers when working with velor, as the texture is highlighted more effectively.

A slot allowing greater movement. Can be used to create movement in your image with a wind turbine.