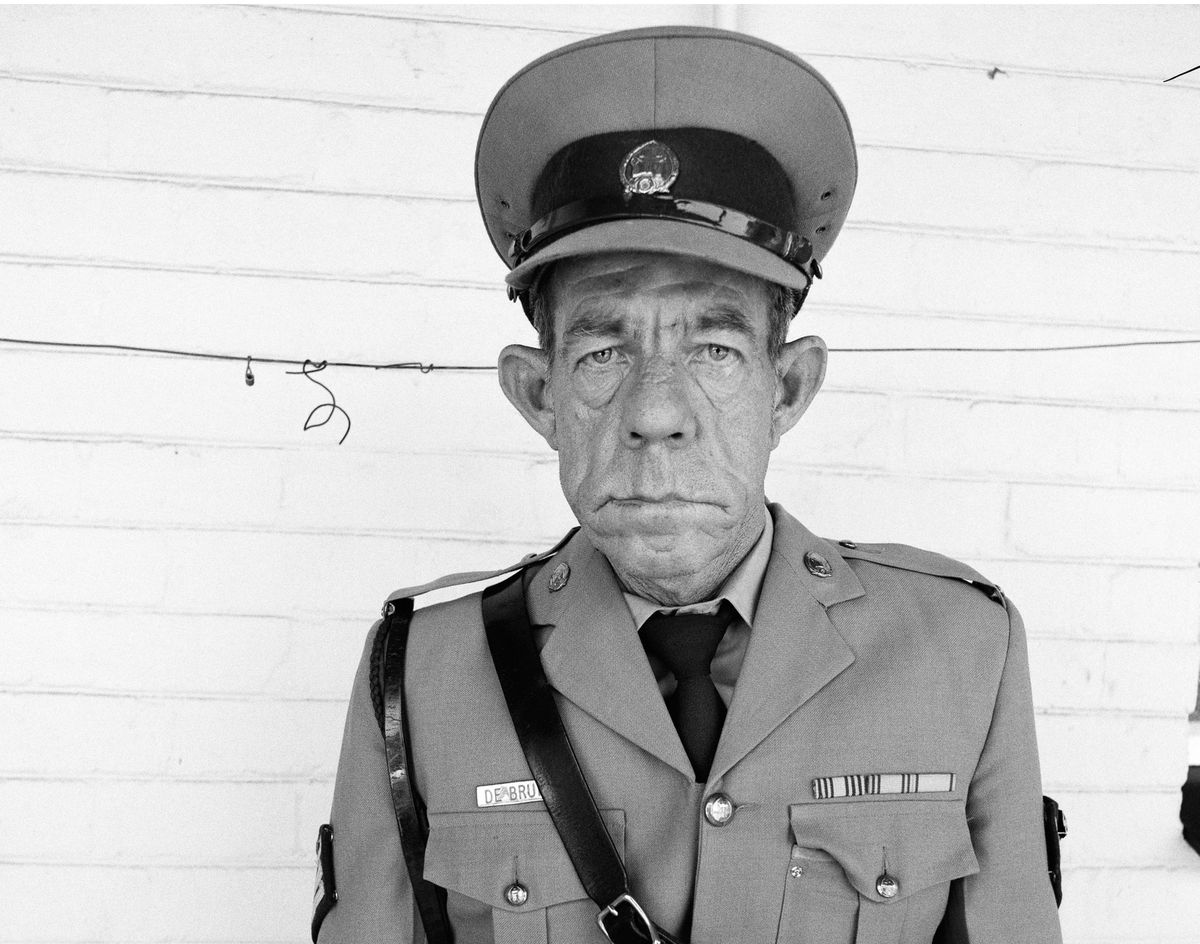 Sergeant F de Bruin, Prisons Department Employee, Orange Free State is one of Roger Ballen’s best-known portraits. The photograph is from the Platteland collection (1986-93) which Ballen, who lives in South Africa, set out to highlight a section of the white rural population living on the margins and cut off from the dubious privileges offered by apartheid. . The huge, disproportionate features of his face and his melancholy gaze do not seem to belong to his body, nor to correspond to a cog in the machinery of white supremacy. However, Ballen insists that the twisted wire behind the sergeant’s head (which is an obsession of the photographer), at eye and ear level, is what caught his attention the most. Ballen says he’s not interested in subjects that simply grab attention visually, but more in those that serve as a trigger, urging the viewer to dig into the deepest, darkest parts of their own psyche.

Geologist and psychologist by profession, after five decades of career, Ballen describes himself as a psychological and existential photographer. He has achieved international fame through his disturbing work with subjects often alien to South African society. People who live in poverty, many of them handicapped or mentally unstable, generally white, and often framed in the dilapidated houses they inhabit, where they act in defiance of common sense. It is a work that over time has become loaded with metaphors and theatricality, leaving aside the human form to incorporate animals (which remind us that we are just one more species on Earth), drawings and sculptures, which offer a much more complex and abstract vision. story that sometimes blurs the line between fiction and reality.

“My photography is not about people or the places in which they appear. They do not document a political or social reality. It’s basically a psychological experience,” Ballen, who is one of the protagonists of the second edition of the Castilla y León International Photography Festival, told EL PAÍS in a video call. Ballen will exhibit a collection entitled The World According to Roger Ballen, made up of 50 photographs belonging to one of his most representative series, in which six themes predominate that helped shape the author’s vision: sons, people, animals, reality versus unreality, designs and color, inscribed in an aesthetic that Ballen himself has come to call Ballenesque.

Jacques Sonck will also be exhibited at the festival with a series called Portraits, made up of 40 photographs from a single ongoing series started in the 1970s. “I’m interested in people who stand out visually,” he tells EL PAYS. “Anyone who stands out from the norm by their appearance. Any age, sex or race. Marginal or not. In principle I have a clear vision of what I’m looking for, but I always let myself be surprised. In reality, I am looking for the particularity. And I underline it in a frame.

If Ballen and Sonck share anything, it’s their early love of photography. Ballen, who was born in New York, grew up with the works of the great photojournalists of the day hanging on his walls. His mother worked for Magnum and often rubbed shoulders with Cartier-Bresson and Kertész. Interest in the medium also emerged at a young age for the Belgian; at the age of 12, he was amazed by the beauty of the cameras displayed in the window of a shopping centre. If Ballen described his style as “documentary fiction”, Sonck defines himself as “a documentary portrait photographer”. As such, he takes to the streets in search of subjects whose names he never asks (Antwerp, Brussels and Ghent tend to be his main centers of interest). Some pose spontaneously, after having found a neutral background that decontextualizes the subject and underlines its singularity. Others are photographed in his studio, where he uses spotlights to sculpt their features. In both cases, they keep a neutral and distant gaze. Without ridicule, but also without melancholy. “Without judgment,” says Sonck, contradicting Richard Avedon’s view of the portrait: “The moment an emotion or a fact is transformed into a photograph, it is no longer a fact but an opinion.”

Sometimes Sonck focuses on a single detail, perhaps his subject’s tights or arm. Sessions tend to last no more than 15 minutes. His photographs have no title and are only accompanied by the date and place where they were taken. “They don’t need a lot of information,” he says. “I’m more interested in the viewer using their imagination to complete the story. Everyone who poses for me is important. They’re all different but they deserve the same treatment and respect.

Ballen’s and Sonck’s works have been compared to that of Diane Arbus, something Ballen doesn’t seem to agree with, as he singles out writer Samuel Beckett as the biggest influence on his career. “My work evokes the absurdity of the human condition,” he says. “In reality, we’re all strangers in the psychological realm, and from there, we all live on the fringes in some way. We can’t predict what’s going to happen or control the majority of things in life. To think that one is in control is an illusion.Some of his detractors have suggested a lack of empathy with his subjects by emphasizing the extreme or the grotesque, which also happened to Arbus, when Susan Sontag saw a position of privilege and superiority in portraying “pathetic people, who attract compassion, as well as revulsion.

Ballen responds by distancing herself from traditional definitions of beauty. “In my mind, those we call beautiful traditionally have their own angst,” he says. “I can make anyone marginal in my photographs, even if they’re not. I can transform them into a psychobellesque aesthetic. Take the example of Picasso. Whatever his portraits, they become Picasso. Good photography is like creating a painting.

There is something very primitive about Ballen’s images, which take the viewer back to cave paintings. “My images are multidimensional and archetypal,” he says. “One of the reasons they stay with people is precisely because of this archetypal component that is found in meaning and form. As such, the viewer, subconsciously, is able to recognize the cave in some degree, or something more primitive, and recognize that this is part of its evolutionary development. These are hard things to prove. Images can be as primitive as they are sophisticated. They are full of opposites; they are dark and disturbing at the same time as they contain comedy and humor. Beauty and ugliness coexist there. There is not a single word capable of expressing the coexistence of these dualities.

According to Ballen, the deepest word in our vocabulary is nothing. “Nothing is dead. And the biggest fear you have is death; usually nobody wants to die,” he says. “The big mystery is where we came from and where we are going. , and as such we are always dealing with nothingness. We are never exempt from it. We try but unconsciously the idea determines our behavior and that of all animals.