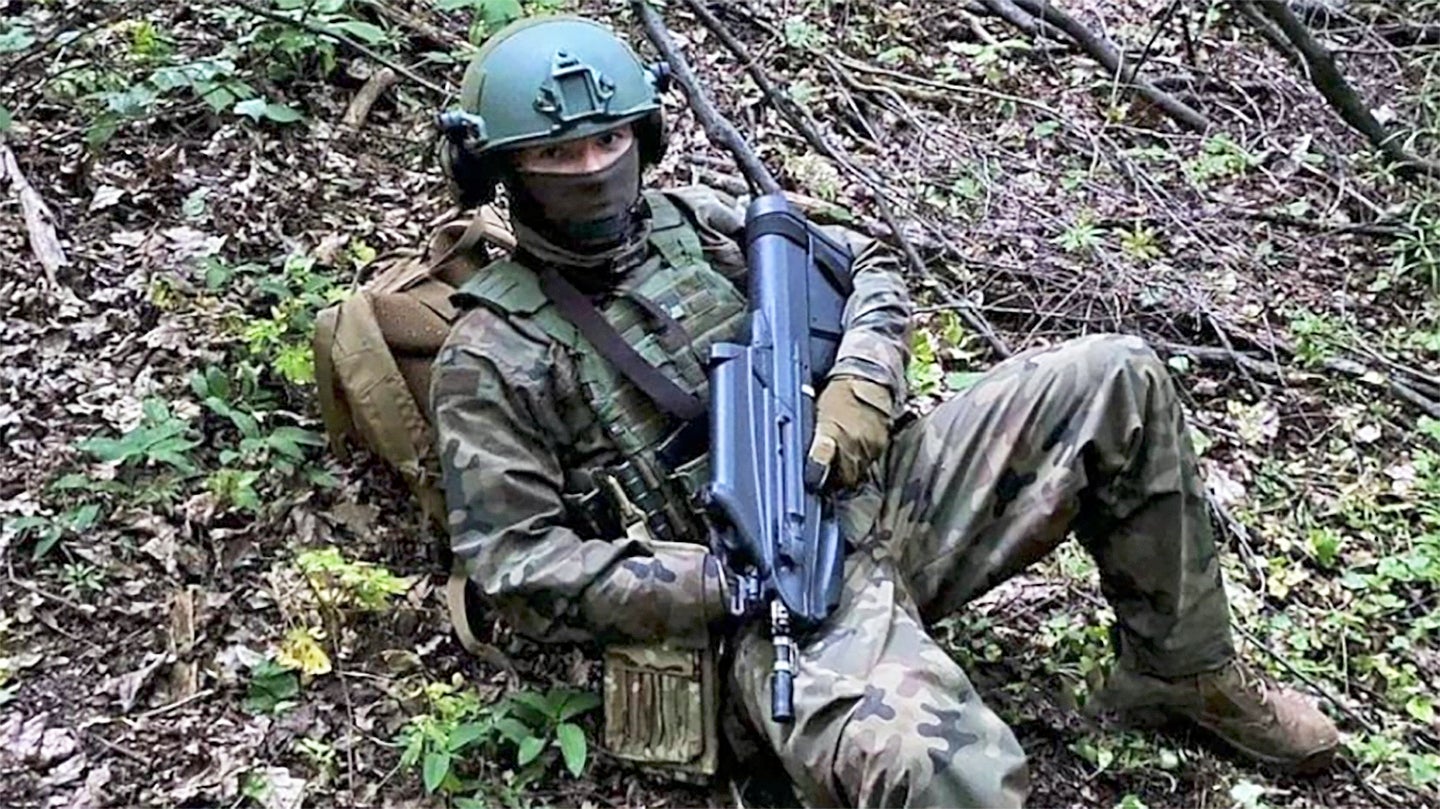 Photos have surfaced online showing F2000 assault rifles in the hands of the Ukrainian Armed Forces. The photos are also another example of a somewhat rare small arms used on the Ukrainian battlefield.

The two photos in question, both posted on Twitter, don’t offer much context in terms of the details surrounding the delivery of the F2000. In one photo, a Ukrainian soldier wearing a nondescript uniform and lying alone with the weapon in his hand. In the other image, three Ukrainian soldiers are pictured in various uniforms holding the polymer-coated rifles while standing in front of a pickup truck. There are few common denominators shared between the photos, the F2000 being one of them.

The Belgian company FN Herstal is the manufacturer of the F2000, which was produced by the company to meet the need for a modern, modular assault rifle and debuted in 2001. The weapon features a compact bullpup layout, which meaning that the action and chamber are located behind the sear parallel to the shooter’s face rather than in front, as is the case with most modern military rifle designs. This not only reduces the length of the rifle, but makes it an ideal rifle choice for ambidextrous shooters.

The F2000 can also be customized with various add-ons to better suit the intended mission. An M303 under-barrel module could be fitted to fire tear gas canisters for peacekeeping operations, or the rifle could be fitted with FN EGLM 40mm grenade launchers and a computerized fire control system exclusive for more lethality. However, none of these add-ons can be seen on the rifles in the photos.

It should also be noted that the rifles appear to be F2000 models in their stock configurations. More recent iterations of the weapon designed for customers like Slovenia possess visibly different characteristics, which could further support the claim that Belgium is the supplier of the F2000s in question. The rifles were also used to some extent in Poland and Spain, serving as additional potential sources for delivery. Other known buyers of the F2000s are in the Middle East and Asia, which are not known to be among the countries that have donated weapons to supplement Ukraine’s forces.

In the tweet posted by Ukraine Weapons Tracker, which is a Twitter account run by individuals who track publicly available information regarding weapons and other equipment used in the conflict, it is mentioned that Ukraine received 10,000 rifles from Belgium , including SCAR-L and FNC. . However, it is unclear whether or not the F2000 assault rifles were included in this donation.

Although it is confirmed that Belgium donated 5,000 FNC-type assault rifles, 200 anti-tank weapons and 3,800 tons of fuel to the Ukrainian government, there was no official mention of deliveries of SCAR- L and even less of an F2000 expedition. However, the SCAR-L and F2000 rifles were photographed on Ukrainian soil and shared on social networks.

The FNC type assault rifles that have been confirmed by the Belgian Ministry of Defense as having been donated are also designed by FN Herstal, which could further support the claim that Belgium played a role in the appearance sudden outbreak of F2000s on the Ukrainian battlefields. These weapons are being gradually replaced by the FN SCAR-L, making it a logical choice to send to Ukraine as Belgium’s capability will not be hampered by stock depletion.

Despite the quantity and means of delivery in the air, the sudden appearance of F2000 rifles underlines a strange supply trend that has become somewhat common. Prior to the conflict, members of Ukraine’s volunteer territorial defense forces were seen using a variety of firearms that the individuals had purchased themselves. This strange development was brought about in response to a direct need for small arms.

As volunteers poured into Ukraine and the ranks of the Ukrainian militia grew, demand for rifles soon began to outstrip supply. Thus, weapons sent in foreign aid packages, such as the previously mentioned FNC-type assault rifles, as expected, began to appear in these volunteer units. It will be interesting to see if the F2000s suffer the same fate.

The Ukrainian Armed Forces are already strong proponents of polymer-coated bullpup designs. They make their own rifle called the Malyuk which is popular among Ukrainian Special Operations Forces and they also build a version of Israel’s Tavor called the Fort-221 under license. You can read more about these two rifles in Ukrainian service here.

Needless to say, locally supplied weapons are becoming harder to find as the conflict rages, supplies dwindle and demand increases. Otherwise rare, smaller weapons are becoming less and less surprising to see on the battlefield, with Polish Grot C16A2 assault rifles also having made an appearance, for example.

There are also rumors of privately funded arms purchases to equip volunteer forces.

While Ukrainian forces are surely making do with what they have, the sources from which they acquired many of their weapons are not always clear. But that doesn’t seem to matter to Ukrainian volunteers and militia members who need small arms, and probably not anytime soon.