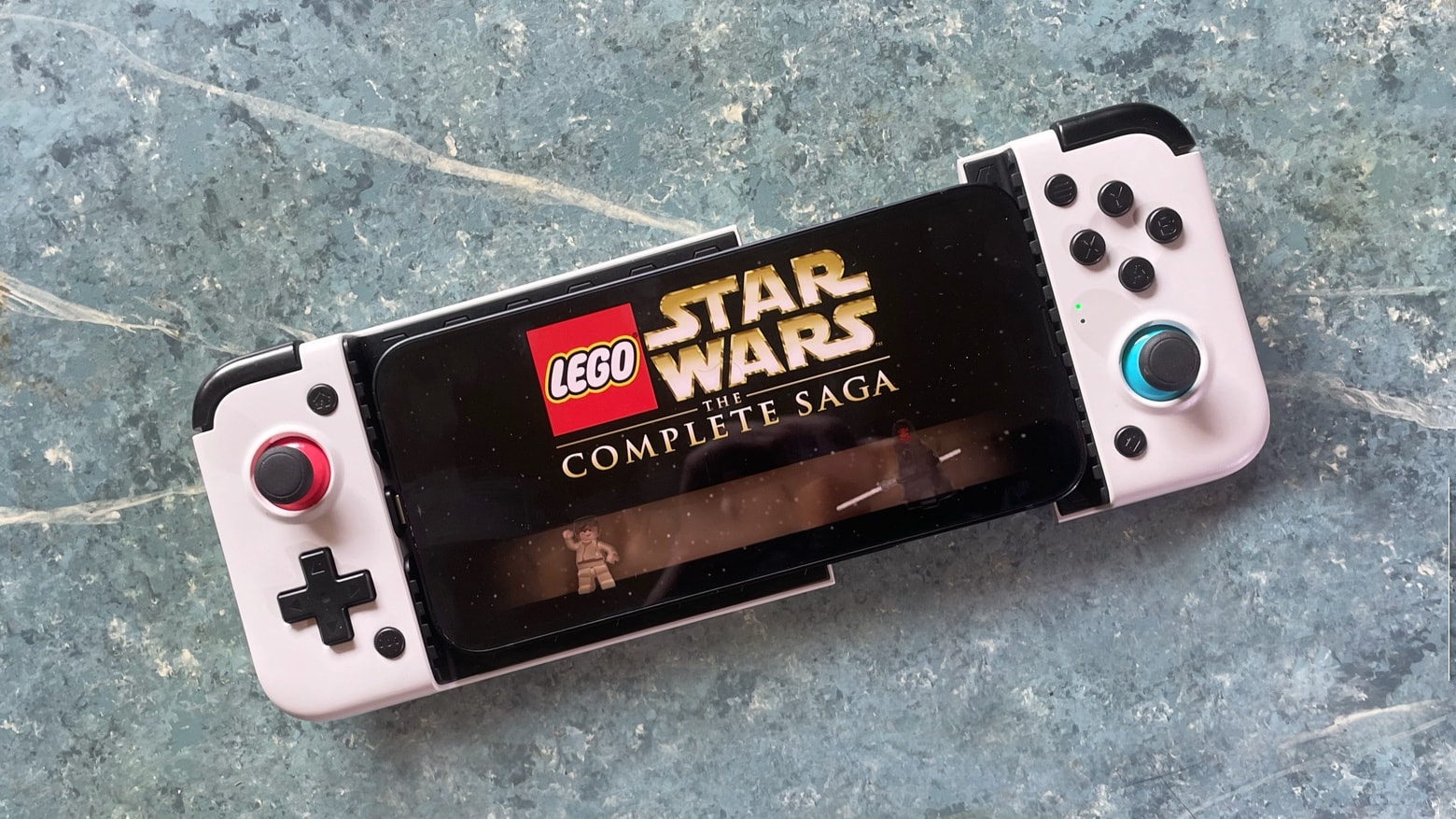 If you’ve ever wished you could merge your iPhone and Nintendo Switch, I have great news. The GameSir X2 Lightning wraps around your handset and adds physical buttons and joysticks in a design reminiscent of the Switch Lite. And it includes a Lightning connector to plug directly into your iPhone.

I spent many hours playing games with this accessory – probably more than I needed for testing. Here is why I like it.

This article contains affiliate links. Mac Cult may earn a commission when you use our links to purchase items.

Many iOS games work with external game controllers, so you don’t have to use irritating virtual joysticks and buttons. The on-screen controls are … OK. But they can be tricky to use when you’re in a rush, like when around 50 goblins are charging your character and you need to move quickly to avoid being overwhelmed.

The X2 is much like an Xbox controller that has been split down the middle to surround the phone. Or a Switch Lite, as I mentioned earlier.

Thanks to the Lightning connector, it is extremely easy to use. Plug it in and you are ready to play.

The GameSir X2 Lightning measures 7.0 inches by 3.3 inches by 1.5 inches when not wrapped around an iPhone. But you can fit a 6.8 inch tall handset in it. That’s half an inch longer than the iPhone 13 Pro Max.

The game controller weighs 0.4 pounds. Overall, it is relatively small and light. Just be a little careful: the case is plastic with a lot of moving parts and you can break it if you abuse it. Carry it in the very nice carrying case supplied with this product.

But don’t think the X2 Lightning can’t stand up to ordinary use. GameSir says buttons are good for 3 million clicks. I have used the ones in my test unit for many hours and they are still going strong.

Speaking of buttons, the controller has a layout close to the standard Xbox. On the left side of a joystick and a D-pad. On the right side is a second joystick and ABXY buttons. Plus L1 / L2 bumpers and R1 / R2 triggers.

I say “close to standard” because the forward-facing joysticks and buttons are lined up on top of each other, not diagonally like they are on Microsoft’s controller. It didn’t take long for me to familiarize myself with this layout, despite the fact that the buttons aren’t placed exactly as I’m used to. And that’s after spending at least a thousand hours holding an Xbox controller.

The buttons are reasonably clickable. They aren’t as good as those on an Xbox controller, but they didn’t interfere with enjoyable hours of play. And the bumpers and triggers are very clickable.

You may have noticed that the X2 does not have large handles. While there are slight bulges covered with textured rubber to make the device more comfortable, they don’t come close in size to what you’ll find on an Xbox controller. I think GameSir has put an emphasis on portability. Large handles would have roughly doubled the volume. And the same goes for the placement of the buttons. Setting them diagonally would have made the controller much wider.

One of the best features of the GameSir X2 Lightning is its name – the Lightning connector. This makes it a plug-and-play device. Insert your iPhone into the slider and you’re good to go, with no need to set up a Bluetooth connection.

Another advantage is that you can easily switch the accessory between any number of iPhones. It works immediately regardless of which handset it is connected to.

Plus, your phone powers the controller, you don’t have to worry about a second battery. And if your handset’s battery starts to run low, plug a Lightning cable into the game controller to charge your iPhone.

The Lightning connector is designed to swivel up and down, so there is no risk of damaging or damaging it when inserting the handset into the slider.

The GameSir X2 Lightning can be used with Apple Arcade and MFi games. And it supports cloud gaming services, like Google Stadia, Amazon Luna, and Xbox Game Pass.

I tested a lot of games. (Yes, it’s really my job.) I started with the classic Lego Star Wars, an MFi game. I went to Oceanhorn: Dungeon of Chronos, which is part of Apple Arcade. And then I played Panzer Dragoon: Remake via Amazon Luna. The controller performed as expected in all of these cases.

Tip: To make sure the software knows you want to use an external controller, connect it before launching the game.

As previously stated, the X2 Lightning’s housing is made of plastic and the sliding action limits its sturdiness. Mine easily withstood many hours of use, but I can’t guarantee that it will survive if you toss it in a backpack with a MacBook, The Complete Works of William Shakespeare and a pair of dirty crampons.

An elastic strap inside the case holds the controller in place. And there is an internal pocket for a charging cable if you want to carry one.

I have tested many iPhone / iPad game controllers, and this one is an exceptional combination of convenience and portability. I really like that the X2 Lightning is plug-and-play. And it’s small enough that I can easily carry it around and be ready to play almost anywhere I go.

Alternatively, there is a Bluetooth version of the X2 for those who want to play on both iPhone and Android. It’s $ 59.99.

Gamers can also consider another option designed specifically for iPhone: the Rotor Riot wired game controller ($ 49.95). It’s very similar to an Xbox controller, with oversized handles and the standard button layout. And an adjustable clip to hold your iPhone.

If you’re okay with going wireless, there’s the GameSir G4 Pro ($ 49.99). It is also close to a standard Microsoft controller in design but with an added clip. Moreover, it supports Android and Windows.

Or you can just use a standard Microsoft Xbox controller and attach your iPhone with the OtterBox mobile game clip ($ 29.95). There is even a version of the clip with MagSafe.

GameSir provided Mac Cult with a review unit for this article. Check out our review policy and see other in-depth reviews of Apple-related items.