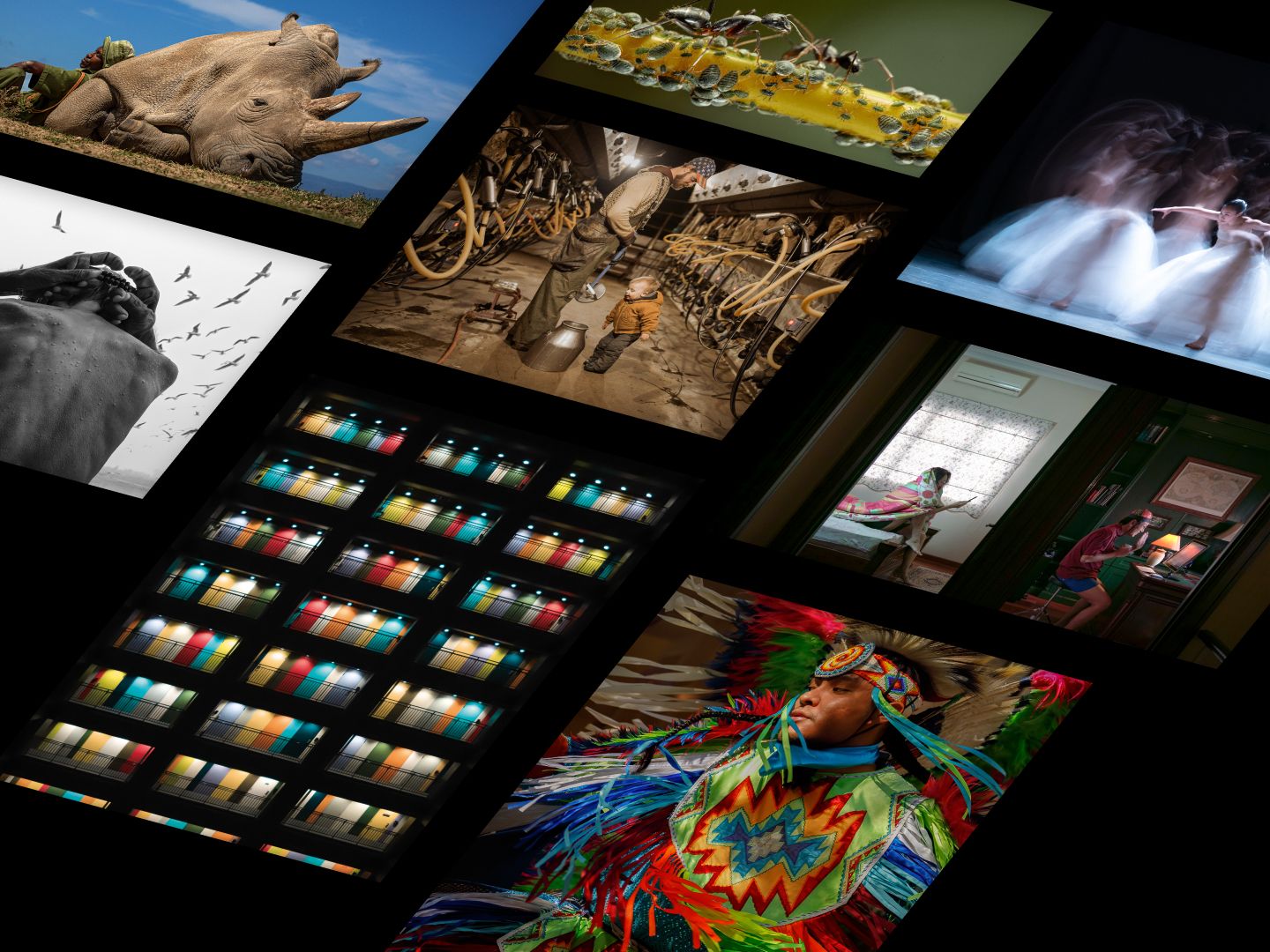 For the Lunar New Year celebrations in 2021, held as the Covid-19 pandemic raged, the Malaysian state of Selangor had limited travel to a radius of ten kilometers. Video chats are expected to replace typical in-person celebrations for thousands of families, including those in Sinsee Ho.

“I took this photo on the third day of the new year,” she wrote via email. “I asked my husband to wear a red shirt and a traditional Chinese ponytail hat to represent the Lunar New Year festive mood, while I described a more relaxed vibe, like I had just woken up from the lit I used a tripod and a 10 second self-timer to take the picture.

“I borrow ideas from street photography, a genre that I love, to show similarity and contrast within the same image. The similarity here is that both people use technology to communicate, facing the same direction. The contrast is that one is dressed (at least in the upper part of his wardrobe, for video chat purposes!), while the other is the opposite.

Ho’s double portrait won the grand prize Smithsonian The magazine’s 19th annual photo contest, which received over 47,000 photographs captured in over 180 countries. The magazine also recognizes six other winners in the People, Travel, American Experience, Natural World, Altered Images and Mobile categories. Over 13,000 votes were cast in our Readers’ Choice contest, the winner is also included below.

The 20th annual competition will be open for submissions in September.

Environmental photographer Matjaz Krivic accompanied a pair of journalist friends to Kenya last year partly to cover a story about former British Special Air Service commandos training rangers on how to outwit poachers. This illegal hunting is one of the factors that has driven northern white rhinos like Najin, pictured here, to near extinction. The trip also included a visit to Ol Pajeta Conservancy, Najin’s home, to learn how scientists are trying to save the species from the brink. The last known male northern white rhino died in 2018, though his sperm was saved for artificial breeding efforts that have so far yielded inconclusive results.

Krivic says Najin and his daughter Fatu adore their goalkeeper Zachary Mutai, pictured here. Najin is friendly with most humans; Fatu is much spikier. Krivic took this photo of Najin and Mutai at noon, when the six-hour effort in the grazing area under the sun had taken its toll. Most of the time, Najin and Fatu drink water then collapse,” says Krivic.

Six months after this photo was taken, Najin keepers decided to stop harvesting embryos from the 32-year-old rhino, given his age and other risk factors.

Prathamesh Ghadekar shoots weddings and other events as part of a career, but it’s the relationships between creatures that some people prefer not to think about that really excites him.

“My main interest is microfauna,” he says. “Reptiles, amphibians, arachnids, insects. I don’t photograph birds and mammals much. His fondness for often misunderstood animals grew when he was called upon to eliminate snakes that had crept into his neighbours’ homes. From there, he became interested in other reptiles, then in arachnids and scorpions. “Anything that was really small and neglected,” he says. He came up with his own classification for these brute beasts: cryptic species.

His winning photograph documents a symbiotic relationship on a bamboo stalk, between the ants that defend the aphids from predators, and the aphids that secrete a sweet liquid to feed the ants. He’s attempted to document this relationship before, but this entry represents his second attempt, with the benefits of a better camera and an assistant using a flash. It also took patience to capture a scene that would make the interconnectedness of the creatures clear. “For me, that’s really important: showcasing sloppy behavior in the perfect light and good composition,” he explains. “Then you can make people aware of these encrypted things that are happening all the time in nature. It’s not very easy for people to see these relationships.

A friend of the photographer recommended a visit to this stunningly colorful office building on Odaiba, a man-made island in Tokyo Bay in Japan. Odaibia was built in the 19th century to defend against naval attacks on Tokyo proper, but is now a shopping and entertainment destination. The building is private, but Tai entered it via an acquaintance who worked there. Stepping out of the elevator into the atrium, “My vision was overwhelmed by thousands of colors,” Tai writes. “I was eager to shoot as many angles as possible, including vertical and horizontal compositions,” even though his time on location was limited. “This place is definitely one of the most spectacular photography spots I have ever seen in the world.”

Translating a dynamic form like dance into a static form like photography requires more than skill and the right equipment. It takes planning. “Part of the trick was figuring out where they would move,” says photographer Craig Lefebvre, who took this photo the first time he saw the Indigenous Enterprise dance troupe perform at the village of Tlaquepaque in Sedona, in Arizona, an arts and shopping destination dotted with trees and courtyards. He arrived an hour before the advertised performance to take test photos and try to determine how the interaction of the columns and wandering tourists would influence what passed through his lens. “I was trying to work with the light and the shadows that were dancing around that yard all the time,” he says. He estimates he was 25 to 30 feet from Navajo dancer Kenneth Shirley when he took the shot.

Yamuna Ghat provides pedestrian access to the holy Yamuna River just across an undeveloped marsh island. It is a popular site for reflection and for birdwatching. Sunil Choudhary goes there to spot the Siberian gulls that rest there between November and February.

“I am not a regular visitor to Yamuna Ghat, but whenever I visit Delhi during winters, I start my day there,” Choudhary writes. “This man emerged from a sacred bath and the droplets of water on his body [beckoned me] near him. I waited there for a moment and suddenly he put on his pearl garland, and when both his hands were in the right place I had a seagull movement to fill my frame. Tiny water droplets, the movement of the birds and the position of the hands with the beads made this frame for me.

The vibrant energy of the Edinburgh Festival Fringe, the world’s largest arts festival, has been on hiatus since the start of the Covid-19 pandemic. Canceled in 2020 and heavily modified in 2021, the beloved festival was where photographer Garry Platt captured this stunning shot. Platt is from Garboshire in the northwest of England, “home to millions of landscape photographers”, he says, but has been documenting dance performances at the festival since 2004. He had seen this performance, “Floating Flowers”, several times before being ready to photograph it.

“The dancer in the middle held this pose for a second while the other dancers moved. My shutter speed was very slow; half a second or something, so it had this effect where the middle dancer is perfectly motionless and the rest is in this blurry movement.It is a technique that he has mastered by trial and error.

“Dancers don’t often like that,” he laughs. “They prefer everyone to be perfectly clean and crisp. But for communicating motion, I often find motion blur to be much more effective than a fast shutter speed which would give you a very sharp photo. Blur has was done organically, says Platt, and he digitally removed equipment left over from a previous dance troupe so that only the dancers were in frame.

Shayna Stevens’ family has operated a dairy farm in Massachusetts since 1938. It currently has 200 cattle and the family also operates a micro-brewery. This image was captured on a “family milking night” three years ago, Stevens writes, when Harvest, the youngest of her three children with husband Will (pictured), was 2. The curious boy – “daddy’s little shadow”, in Stevens’ words – wanted to know what was in the bucket.

“My camera is never too far away,” Stevens writes. “It’s so important to me that kids have pictures of those memories when they’re older.”