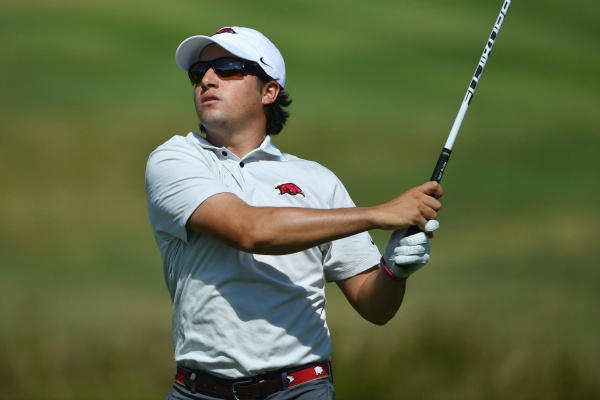 Fernandez de Oliveira shot a last-round 68 on the Teeth of the Dog par 72 course at Casa de Campo Resort, while De la Fuente hit a 71. The pair were part of a four-way tie for second place at 6 under, one shot behind Jarvis, a UNLV freshman from the Cayman Islands.

Jarvis received an invite to the Masters and the British Open, two of LAAC’s sponsors, as well as placement in the final round of qualifying for the US Open based on the win.

Mexico’s De la Fuente had three birdies and two bogeys on the 7,048-yard course. Argentina’s Fernandez de Oliveira, fresh off a win at the South American Amateur last week, went a bogey-free round with birdies at numbers 1, 2, 7 and 12.

Arkansas senior Julian Perico, the second-round leader after a tournament-high 9-under par, shot a 71 Sunday to tie for ninth at 2 under with teammate Juan Camilo Vesga, a freshman redshirt year for the Razorbacks.

Arkansas senior Segundo Oliva Pinto, a first-round co-leader with Puerto Rico’s Roberto Nieves, shot a 76 on Sunday and finished tied for 12th at 1 under with fellow Argentine Abel Gallegos and Mexico’s Isaac Rodea .

Arkansas sophomore Manuel Lozada shot a 1 of 73 on Sunday and tied for 43rd at 13 in his first LAAC appearance.

The Razorback contingent now heads to Tucson, Arizona for Arkansas’ Spring Opener No. 5 at Arizona Collegiate.

The 54-hole tournament is set to begin this morning at Tucson Country Club with 36 holes for all 14 teams, including host No. 29 San Francisco and No. 37 Arizona, and No. 41 Duke.

Fernandez de Oliveira is expected to play No. 1 for Arkansas, followed by Oliva Pinto, senior Luke Long, junior Enrique Dimayuga and Perico. Vesga will play the event as an individual.

Dimayuga, an English junior transferred from Florida Atlantic, will make his debut for the Razorbacks.