How Photographer Dayanita Singh “dances with her camera” | Arts | DW 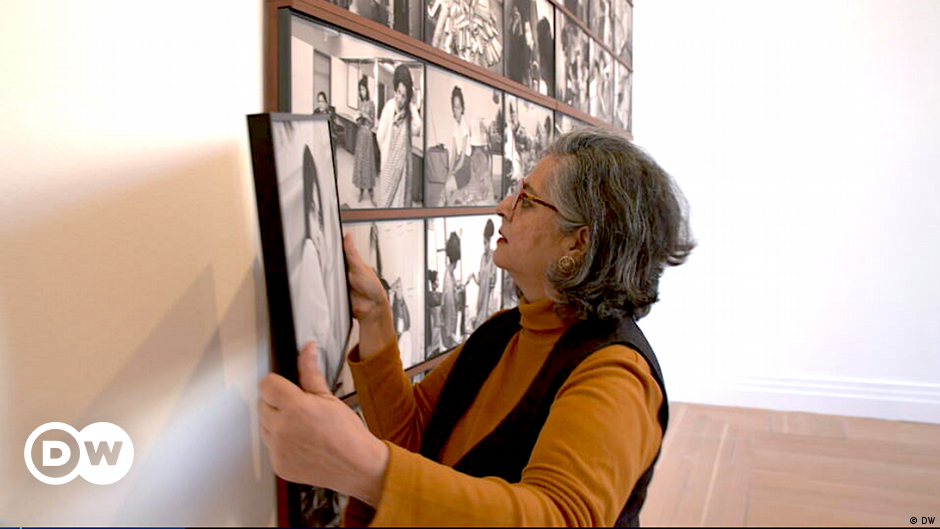 Dayanita Singh is beaming: a major exhibition of her work at the Gropius Bau Museum in Berlin is taking place on the occasion of her 61st birthday.

A few days before the opening, more good news arrived from Sweden, with the announcement that photographer Singh, born in New Delhi in 1961, would receive the prestigious Hasselblad Award.

A Hasselblad camera has accompanied Dayanita Singh for decades; it has long been part of her body, she says.

For Singh, photography itself is a physical act, a dance with the camera. Therefore, the recently opened exhibition at the Gropius Bau is called “Dancing with my camera”. The motto also refers to the visitors, who repeatedly have to stretch or bend over in this spectacle.

“Exhibitions must be alive”

The large-scale photos on the wall are the exception in the show. Instead, Singh shot most of the photographs in space, grouping them together and framing them in teak wood. These constructions form in themselves small museums — for example, the “Museum of Chance” and the “Museum of Dance” — and can be folded up or joined together to form a screen.

In the process, photography is extended to sculpture or even architecture. In this way, new interpretations emerge again and again – also because Singh constantly changes the sequence of images. “Exhibitions should be alive, because that’s how I experience my work,” she says.

The photographs themselves serve him only as raw material, which, like film stills, only tell new stories when ordered in sequence.

Singh’s career began in the 1980s. As a young photographer, she accompanied legendary tabla musician Zakir Hussain on concert tours. To this day, she remains friends with him. “I can’t let go of the people I photographed. I stay connected to them.”

“I feel like this is where I belong”: Dayanita Singh surrounded by her photos

Studied in New York, represented at the Venice Biennale

Singh studied documentary photography and photojournalism in New York. His work was quickly published in The New York Times and The Times of London.

One of her greatest successes to date is her participation in the Venice Biennale art festival. In 2013, Singh was represented there in the German pavilion alongside Ai Weiwei, Santu Mofokeng and Romuald Karmakar.

A reporting assignment turned life project: Singh’s encounter with transgender Mona Ahmed, who lived in a Muslim cemetery in New Delhi and died in 2017, still moves him today. “Mona was a unique woman, she did not allow herself to be locked up in society. Imagine having someone like that in your life: what a role model!”

Singh slips into a jacket of his own design, which contains small foldable booklets – each a pocket museum in itself. She can sell them on the street at any time, she laughs mischievously.

Being independent of institutions, of the art market, is important to her. After all, photography was once young Singh’s ticket to freedom.

Set your own rules

“It was a medium where there were no other women at the time. So I could make my own rules about how I wanted to live. Photography freed me from all the social obligations that were very present at the time: getting married, having children. They are certainly quite wonderful things. But not for me! Singh said.

On the back of the jacket is the saying “My museum life”.

Life and art merge in the work of Dayanita Singh, who will receive the Hasselblad Prize in the fall — combined with a new exhibition.

The exhibition “Dancing with my Camera” is on view at Gropius Bau in Berlin until August 7, 2022, after which it will travel to Villa Stuck in Munich.

This article has been translated from German.