Indigenous photographer Cara Romero will speak at The Hood this Wednesday 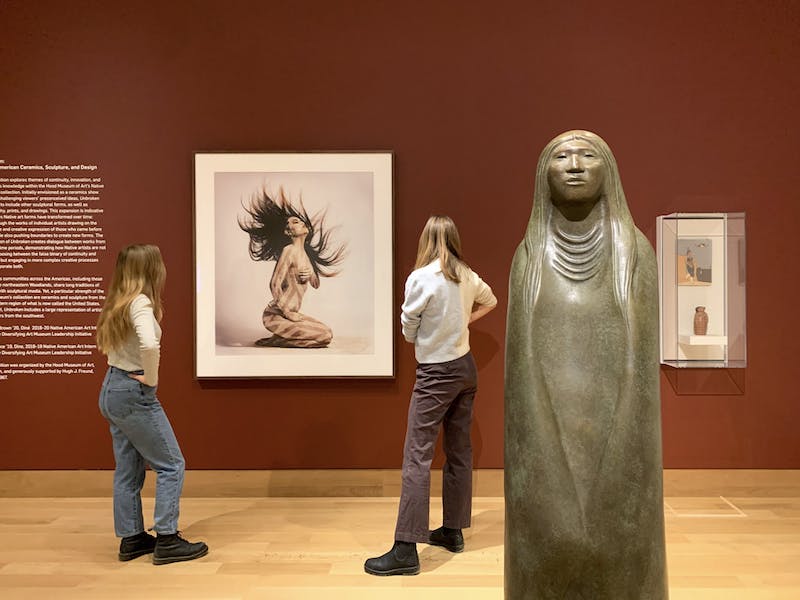 Three of Romero’s works are currently on display at the museum.

On February 9, the Hood Museum of Art will host a conference with Cara Romero, moderated by Indigenous Art Curator Jami Powell. Three of Romero’s pieces—“Kaa,” “Oil Boom,” and “Water Memory”—are currently on display in two exhibitions in the Hood: “Unbroken: Native American Ceramics, Sculpture and Design” and “This Land: American Engagement with the natural world.”

“Kaa” – currently on display at Unbroken – is a photograph of Kaa Folwell, a Pueblo potter. Dillen Peace ’19, a former Hood intern who co-hosted Unbroken, spoke about the importance of Romero and Folwell’s collaboration in creating the piece, which tells the story of clay in Indigenous communities. and how it was transmitted. as an art form for centuries.

Peace explained that the direction of this work was shaped by the ideology behind ceramic making, emphasizing the sacred nature of the art rather than the physical objects themselves. The significance of ceramics and pottery making is difficult to grasp from an outside perspective, highlighting the importance of this art as it gives insight to the average viewer.

“For most Aboriginal people, [ceramic making is] a spiritual and cosmological understanding, and that’s what ‘Kaa’ meant to their people: that there was a sacred aspect to what ceramics and pottery meant to them,” Peace said.

Peace also noted the collaborative aspect of Romero’s process in creating “Oil Boom”, currently on display in This Land. Romero worked with Indigenous artist Cannupa Hanska Luger, who is of Mandan, Hidatsa, Arikara and Lakota descent, and is also the subject of the work. Luger’s presence makes photography more intimate and personal as the expansion of the industry drilling into Native American lands for oil, called the oil boom, has personally affected his community, according to Peace.

Romero incorporates many experiences into his work by collaborating with a variety of people – such as affiliated tribes in the northern United States – to use their stories in his art to create a holistic view of what it means to be a Native today. today.

“She’s able to take in a lot of their experience and what they think of what the job should be and what it’s all about…Because she was working with Cannupa Hanska Luger and he’s from the three affiliated tribes in the north and they have these conversations and issues that deal with the oil boom that’s happened, the work has become very important just because it feeds off of that image,” Peace said.

Powell introduced Romero’s plays to The Hood for the first time in 2018. For Powell, Romero’s plays are important academically and socially, as they exist at the intersection of Indigenous identity and environmental justice. Since then, the Hood has acquired five of Romero’s pieces and plans to host a solo exhibition of Romero’s work in 2025, according to Powell.

Powell noted the intellectual generosity shown by artists when they bring their understanding and experiences into a public forum.

“In her photographs, Cara sometimes talks about really tough issues,” Powell said. “For example, in ‘Oil Boom’ she talks about the violence of colonial displacement and the extraction of natural resources, but she is so generous in her appeal to the viewer to engage in this difficult conversation that it doesn’t give people feel like they are being called or make them feel bad.

Sháńdíín Brown ’20, former Hood intern and fellow Unbroken co-curator, also talked about Romero’s use of photography to reinterpret the artistic expressions of indigenous peoples and tribes throughout history. In particular, Brown pointed to Romero’s “TONGVALAND” billboard series, which deals with environmental justice and the indigenous peoples who still live in Los Angeles, and his “First American Girl” portraits, which highlight current stereotypes and caricature of Indigenous women in popular media. media.

“For Cara as a Chemehuevi artist, I guess you could say that photography is not a traditional art form of the tribe, but it develops what Native American art is,” said Brown. “For a long time these were just traditional practices, so I think it’s really powerful that she’s doing new things.”

Brown said she hopes that after the conference, audience members will broaden their perspectives on Indigenous art practices.

“Sometimes Native American artists do ‘controversial’ work or things that come out of that typical view of Western or American art history, and just being open to those ideas is really powerful” , Brown said.

Peace agreed, pointing out that Romero’s practices are a continuation of Indigenous storytelling — an art form that has been around for centuries. He hopes audiences will see that Indigenous artists continue to engage in a dialogue about staying true to their tribe and history while adapting contemporary mediums.

“We have been telling our stories for a very long time, but most of them have not been told in an intimate setting, whereas now we find that many of our stories are very relevant to the changes that need to be made today. today, changes that we are becoming increasingly aware of,” Peace said.