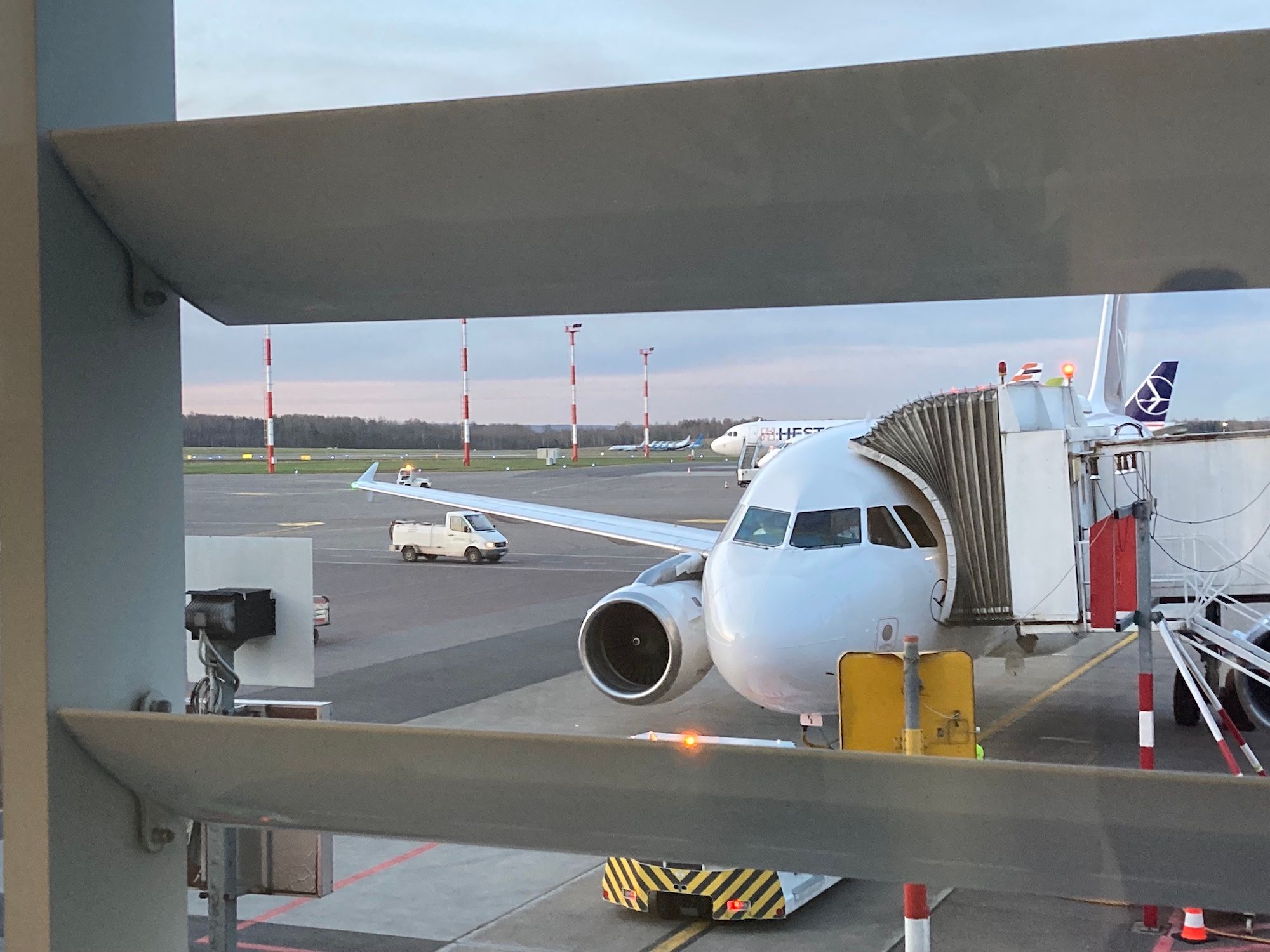 As the saying goes, there is a first time for everything. Not only was this my first time visiting Naples, but it was also my first experience of Lufthansa and Frankfurt Airport. I was really looking forward to experience this Star Alliance airline, considering that my new base in Vilnius (Lithuania) is mainly served by Star Alliance carriers. Here, Lufthansa offers higher frequencies at its hub than its competitors. Combine that with its long list of international destinations, and I was certainly hoping for a good in-flight experience to justify my future loyalty to the carrier.

For pre-flight activities, the booking and check-in process seemed quite straightforward. As the airline had several frequencies from Vilnius to Frankfurt and from Frankfurt to Naples, there were a few options and therefore more flexibility. My plans had changed a few weeks before booking and rescheduling the flight for a day earlier was easily done via the Lufthansa website – luckily without too much expense. Check-in was easy and offered free seat selection – definitely not a feature of budget airlines.

The journey from the curb to the gate at Vilnius Airport can take up to five minutes if you have already checked in online and do not have checked baggage. Photo: Chris Loh | single flight

Getting to (and going through) the boarding process was simple. However, conducting this in the small terminal at Vilnius International Airport was slightly chaotic and messy. This is to be expected – even at large airports: wherever you go, passengers queue up before their boarding groups are called, creating confusion as to where the queue actually begins. ‘waiting.

For the flight out of Vilnius, I appreciated that the gate staff actively checked boarding passes and groups/zones, and directed premature boarders back to their seats. It was a similar situation in Frankfurt, except passengers scanned their boarding passes and were “discarded” if their party had not yet started boarding.

Another great thing I liked about Lufthansa’s boarding procedure was the fact that they grouped people by window seat, middle and aisle. Those occupying aisle seats were placed in subsequent boarding groups (groups 4 and 5). After priority boarding, passengers with window seats were boarded in group 3. Although we were relatively forward in the cabin, my wife and I boarded as group 3, ahead of 4 and 5, in reason for booking together and having a window and middle seat.

I haven’t looked at the stats on this, but I imagine it’s a smarter and faster way to load the cabin. The boarding areas running from the back to the front are simple. However, with this method, the aisle passengers will inevitably be seated first, then forced to do that awkward little dance around each other as the window and middle seat passengers take their places later.

The first flight was on an Airbus A319 and the second was an Airbus A321. Both were older types. Photo: Chris Loh | single flight

Seated for the first leg of the trip, we occupied seats 9A and 9B in an Airbus A319-100. These seats were located directly in front of the row of emergency exits and therefore could not recline. Despite this, there was ample legroom, even with my small bag under the seat in front of me. The cabin was clean and the seats were comfortable. However, the seats lacked power to charge the devices. Not a big deal for some people – especially on such short jumps (although the very drunk man two rows up made it known that he was definitely not happy with this shortcoming!).

The flight from Frankfurt to Naples was with an Airbus A321-200. This jet also lacked power in the seats, but at least our seats at 35A and 35B could recline slightly.

One of the most disappointing parts of this trip was the lack of snacks and/or meal options. The day before, Lufthansa had sent us an e-mail to tell us that no food would be served on board. This, apparently, is the result of a staff shortage at Lufthansa’s catering partner GateGourmet. With no complimentary snacks and no other food available for purchase, our “in-flight meal service” consisted of a small bottle of water and a small chocolate per person – the kind you might find on your hotel pillow.

Not that food was served on our flights but we found an inconsistency in the onboard menus. The bottom image shows what was offered on both flights in light of GateGourmet’s issues. Photo: Chris Loh | single flight

An airline spokesperson informs me that they are working with GateGourmet to “improve the situation”, so hopefully there will be something available on my return trip. The Lufthansa representative also noted that business class was unaffected by the catering disruption.

As expected, there was no in-flight entertainment on either flight, although in-flight WiFi was available at a cost. Whether you choose to pay or not, you can view your flight progress via WiFi. Screenshot: Chris Loh | single flight

Both segments were punctual and cabin crew were polite and friendly throughout. When boarding the plane in Vilnius and Frankfurt, both used jet bridges, disembarking in Frankfurt required stairs and a bus. Oddly, only the rear doors were open – which I’m sure would have irritated the business class passengers who had to get off the plane last!

A bit odd was landing through a back door in Frankfurt. Photo: Chris Loh | single flight

Was it worth it?

Although the flights were smooth and uneventful, it is certainly difficult to justify the price difference between a basic economy fare with Lufthansa and a budget carrier – which for some routes in Europe are faster because these are direct services. In fact, although there is no direct service from Vilnius to Naples, Ryanair operates a direct flight to the Italian city, from (relatively) nearby Kaunas. The price difference can be significant: At least double the price depending on the time of booking and the day of the flight.

While the lack of food was a bad time and the result of some unfortunate circumstances, it should be noted that Air France offers in-seat food for many of its narrow bodies, as well as basic free internet service for the messaging. As for other non-budget flights from Vilnius, at least airBaltic offers an improved in-flight experience with its A220s, which feature larger windows and a 2-3 layout.

Offering some final thoughts, choosing Lufthansa for this trip offered increased flexibility and convenience, allowing us to arrive at our destination earlier in the day from our hometown. This not only has a monetary cost, but also a longer overall trip with an additional flight. Having options for food would have been nice to have, as well as seat power (which has increasingly become the norm for full-service carriers). Comparing the trip with the budget alternative, friends who took a direct Ryanair flight from Kaunas to Naples ended up being delayed, stressed and tired. Their late arrival left them with fewer transportation options and a more expensive overland journey to their final destination. Despite these drawbacks, their overall costs were still lower.

At least we arrived at our destination at a reasonable time of day and arrived on time. Photo: Chris Loh | single flight

Ultimately, it should be clear that I was disappointed in some aspects of my first experience with Lufthansa, but I recognize the value of paying more to fly with this legacy carrier when needed. The value of the extra expense will depend on the traveler and the purpose of the trip.

Does this Lufthansa experience match yours? And would you pay more for a longer trip with a traditional airline or opt for a budget direct carrier for flights within Europe? Share your thoughts and experiences by leaving a comment.

Breaking: Avianca will buy Viva on the Colombian Shake Up market

Deputy Editor – An experienced photographer and video producer, Chris is a natural journalist. A graduate with a rich travel history, Chris’s insight into routes, networks and alliances brings a depth of quality to his work that is hard to beat. His strong airline relationships in the Middle East and Canada make him an asset to the team. Currently based in Vilnius, Lithuania.