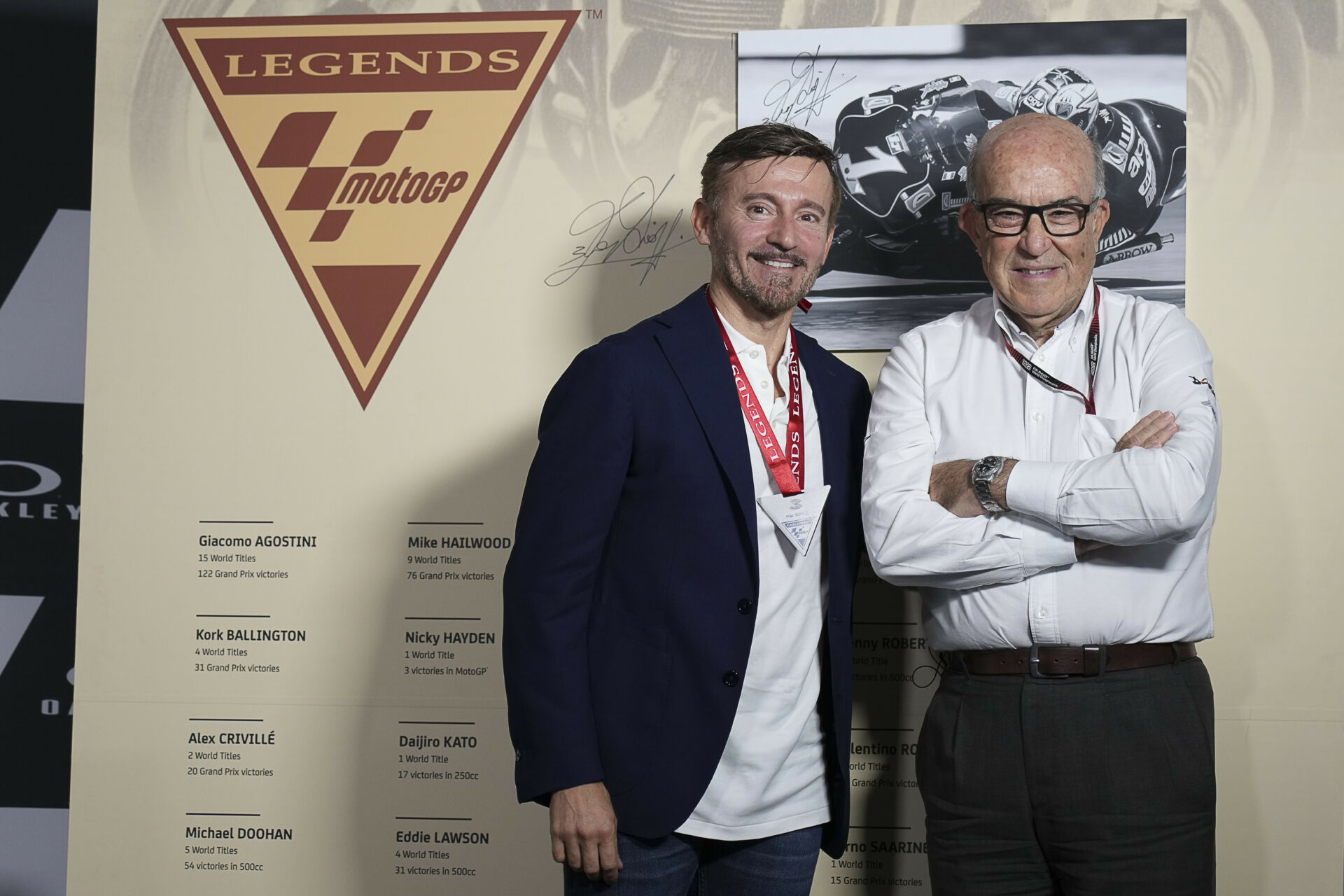 Max Biaggi is now officially a MotoGP™ legend! The four-time 250cc world champion was inducted into the MotoGP™ Hall of Fame at the Gran Premio d’Italia Oakley, with the spectacular Autodromo Internazionale del Mugello as the perfect backdrop. Dorna CEO Carmelo Ezpeleta presented Biaggi with his MotoGP™ Legend medal at Friday’s ceremony, with many famous faces from the paddock in attendance – and a very special video message from HSH Prince Albert II of Monaco also.

Incredibly – considering the career he was to build – Biaggi started racing late, his first competition at the age of 18. From there his rise was stratospheric as 1991 saw his first Grand Prix races and points in the 250cc class, 1992 heralded his first victory and in 1994 “the Roman Emperor” was world champion for the first time – also winning Aprilia’s first title in the 250cc class. The glory didn’t stop there, as Biaggi won the 250cc crown four times in a row and with two different factories, reigning over the category from 1994 to 1997 inclusive and reserving his place in history as one of the best to have ever run in the class.

In 1998 Biaggi moved up to the premier class and, unbelievably, he won his 500cc debut, something that hasn’t been repeated since. He came second that year and began another string of impressive performances, never finishing outside the top five in the championship in any premier class season between 1998 and 2005, his last hurrah in MotoGP™.

By the time Biaggi left the Grand Prix paddock, he had accumulated 42 wins, including 13 in the premier class, 111 podiums and 56 pole positions in total. But his motorcycle racing career was far from over, as he moved on to WorldSBK and claimed 21 victories and 71 podiums, crowning himself Champion in 2010 and 2012 – thus the first MotoGP™ legend to also be WorldSBK Champion. .

Max Biaggi: “First of all, thank you all for coming. It’s a very special day for me and first of all I have to thank Carmelo and Dorna, who make this possible, because without them nothing was possible, so thank you very much, Carmelo. Second, I just want to say thank you to everyone who makes this happen; all the work of the manufacturers in the past, starting with Aprilia, Honda, Yamaha, and all the people who are here are basically the ones who have supported me all the time, in different teams and in different situations, in good times and bad days . So, I’m proud that everyone came; for me it means a lot, because life goes on after the race.

“I am also proud that my family really encouraged me in the bad days to keep doing it and never give up, and they supported me all the time. Today they are here, my son and my daughter are there, so it’s a really emotional moment because they can say now, “Hey, my dad is a legend”, so that’s something cool! Twenty years ago, I never thought about it not even, so as a man, it’s important too.

“Finally, now I am entering the third phase of my life, and of course I am the owner of the team. I want to thank Husqvarna and Sterilgarda, who made this dream come true, so now I am using my experience to create, hopefully the new riders of the future hopefully the champions who knows I want to thank again Dorna, Carlos as well because they have done an impeccable job over the years and MotoGP is now just fantastic , so thank you very much.

Carmelo Ezpeleta, CEO of Dorna Sports: “It was two years ago when we decided to name Max as a legend of MotoGP, but unfortunately the pandemic and the rest of the things did not allow us to do it properly. It is a ceremony that we do without restrictions masks, with everyone happy, and I think the time we waited to do it was reasonable Max was clearly a great MotoGP legend I was telling him, I have a fairing of this bike in my office in Madrid, given to me by Carlo Pernat with number 4. I always remember the beginning of MotoGP.

“When we started, the situation was really different, we had the chance to improve all these possibilities, and now MotoGP is something very, very important. For us, naming Max as a legend of MotoGP does not is not only important for him, but also for us. He was a true legend, he ran very hard, he has a team today and he succeeds and teaches people to do this. For all these reasons, I think that it is very important today to name Max as a Legend of MotoGP, and I am very proud of that. Thank you.”

– 111 GP podiums: Biaggi is one of only 10 riders to have reached the milestone of 100 GP podiums, including 53 in 250cc and 58 in 500cc/MotoGP™. He is the Italian driver with the third highest number of GP podiums, behind only Valentino Rossi and Giacomo Agostini.