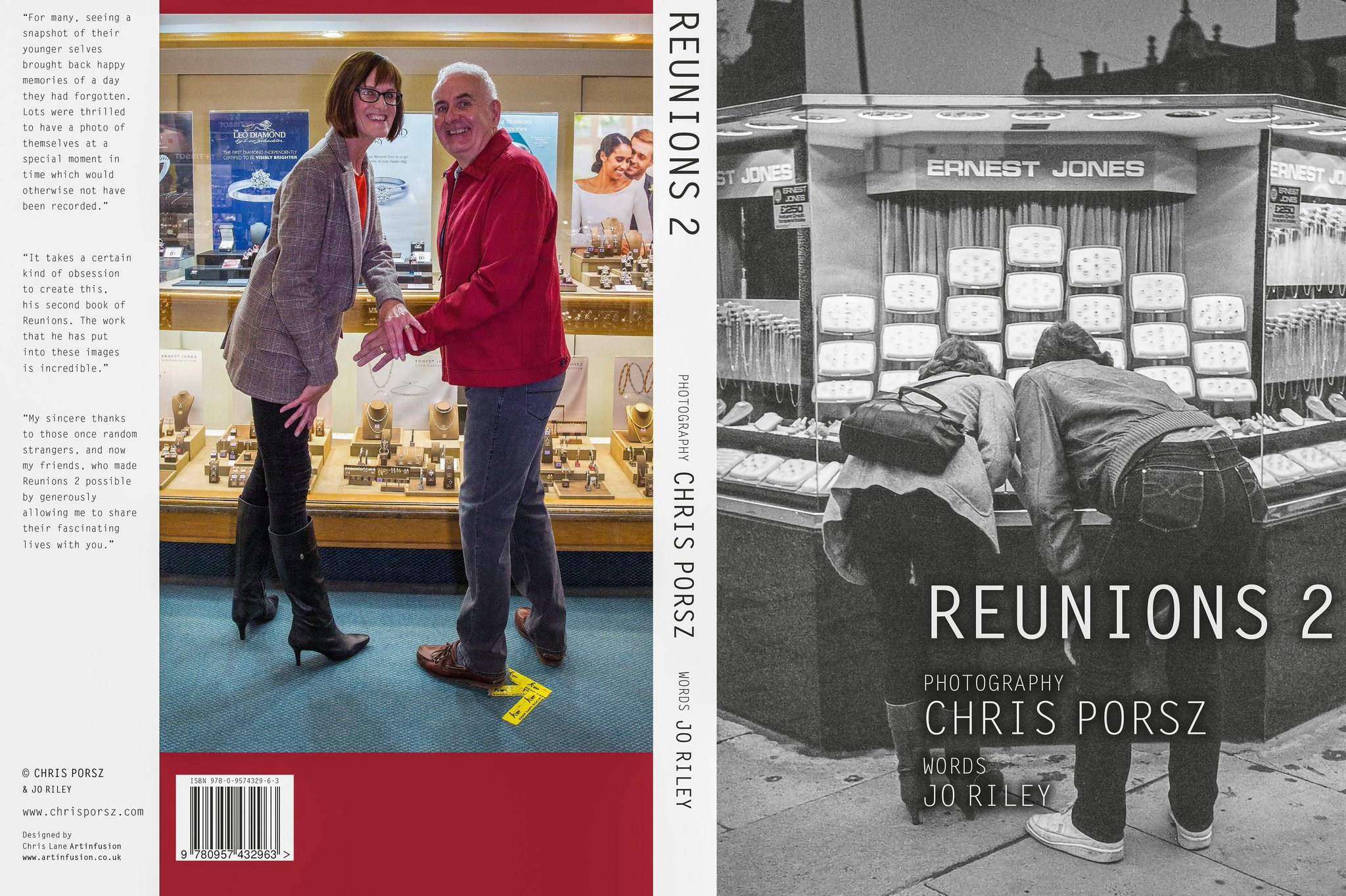 Retired Paramedic Chris spent hours walking around the town of Peterborough, Cambridgeshire in the late 1970s and 1980s, taking candid photos of buskers, bikers and men trash cans, punks, police and protesters, as well as siblings, lovers and street performers.

He began reconstructing a selection of his favorite photos from the past about 10 years ago after some of his lost subjects recognized each other when he printed their photos in the Peterborough Telegraph, as well as on his website and Facebook.

He published his recreations in a book called Reunions in 2016 and was so successful that he was inundated with requests to reconstruct more photos.

Now, thanks to social media, Chris has been incredibly successful in producing 168 more meetings in just 12 months and has released a sequel, Reunions 2, which releases this week.

“It was very humbling and satisfying to attend so many meetings and see the smiles on people’s faces as they reunited with old friends,” Chris said.

“Some people hadn’t changed at all and others had changed completely. Some have gained hair, others have lost hair. Some had a difficult start in life and changed fortunes, others were unlucky. “

Chris took his first camera in 1972 to record a hitchhiking trip to Africa with his then-girlfriend, now wife, Lesley. Six years later his first child Simon was born and he invested in a better camera and quickly caught the photography bug.

On his days off from working as an A&E porter and then as a paramedic, he wandered around his hometown in search of inspiration.

He would smash anyone who caught his eye or stood out in the crowd, from shiny haired punks to siblings playing in the streets.

Chris would often unknowingly end up capturing great moments in people’s lives, like a couple shopping for their wedding rings, who are still married 40 years later, and appear on the cover of his new book.

As he clicked, Chris had no idea how much the city would change over the next four decades or how important his photos would later take on in showing this evolving social history.

Most of the people Chris photographed didn’t know he took their photo, he never imagined he would see them again, and he didn’t know any of their names.

Then, in 2009, he stumbled across his old photos of Peterborough and sent a few to his local newspaper, The Peterborough Telegraph.

The editor loved them and Chris got his own column, Paramedic Paparazzo, posting two of his photos per week. Soon after, he was receiving fan mail from readers who recognized themselves in the pictures.

By 2016, he had compiled an impressive 134 reunion photos and they were published in his first book, which became a worldwide hit.

Chris thought that would be the end of his project, but during the first lockdown of the Covid pandemic, he began to wonder if he could find more people than he had ever managed to find.

He said: “Starting in the spring of 2020, I have made constant appeals and repeatedly posted around 300 of these images on social media.

“To my surprise, I immediately started receiving hundreds of messages. There was an amazing community spirit and help from the audience that wanted me to be successful.

“It was extremely satisfying when characters I never dreamed of finding started to show up, like the girl looking at the Christmas cake in a window, random teens on fairground rides, brothers feeding on the chips in their pram, the mysterious romantic couple that adorn my book covers and the commuter and the donkey.

The cover of the book is also very special for Chris. He spotted Howard and Sharon Marshall, browsing wedding rings at Ernest Jones’s in Cathedral Square in Peterborough in the spring of 1981.

He managed to find them even though he only had one photo of their backs. The couple just celebrated their 40th wedding anniversary and have a daughter, son, grandson and granddaughter.

Chris said: “Although it was almost 40 years ago, I still remember witnessing this special moment. I took a quick photo and continued wondering how it would work! I was thrilled and so surprised when Howard and Sharon contacted me because I knew the chances of finding them from such an obscure photo were low.

Chris will be doing a book signing at the Salvation Army Superstore in Long Causeway, Peterborough, this Saturday and until Christmas from 10 a.m. to 4 p.m.

The photo, from 1981, shows Bernard Norman waiting for a train at Peterborough station. Chris Porsz spotted it under an advertisement for The Times newspaper featuring a donkey trying to nibble on a hanging carrot. At the time of the original photo, Bernard was working as director of retail operations for Peterborough-based Thomas Cook, but traveled to London three times a week.

The photo was recreated in July 2021. Bernard Norman, who lives near Stamford, is now 80 years old and retired. Chris Porsz said: “I have searched for him for 10 years on and off and his photo has been published several times in the Peterborough Evening Telegraph. Then, out of the blue, Bernard spotted his photo and contacted me, I was overjoyed.

The photo, from 1985, shows friends Toni Cray (née Pignatiello) and Teresa Weston (née McPartlin) on the Sizzler at the Town Bridge Fair in Peterborough. Toni said: “We had just left Stanground Comprehensive School after taking our CSE / GCE exams and a lot of us went to the fair on Friday night to celebrate. I was 15 and Teresa 16.

The photo was recreated in May 2021, showing Toni Cray (née Pignatiello) and Teresa Weston (née McPartlin). Toni got a job as a clerk with Her Majesty’s Land Registry in Peterborough in 1986 and has now been there for 35 years. She remained in contact with Teresa until 1997, but when they met for the reunion photo at the Peterborough Fair in Bretton, they had not seen each other for over 20 years. Teresa ended up dating one of the boys from her school year who was at the fair that night. They married in 1989 and are still together. She worked in a retirement home for 29 years and is now area manager for a cleaning company.