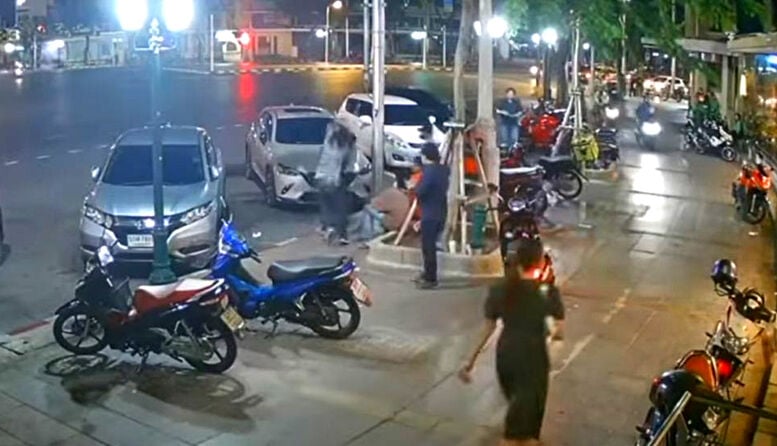 A photographer named Nattaphon, who works for a news agency, is still awaiting justice after he was allegedly attacked by a group of ultra-royalists near the Democracy Monument last week. He suffered bruises to his back, neck and upper arms.

Right after he finished working and packing, he noticed a man wearing a long-sleeved shirt and a ponytail approaching him. The unidentified man approached him and asked if he “had any problems” and “why was he looking at him”. He asked for his phone and wondered if he was a journalist, which he denied, before the man grabbed his arm.

According to Nattaphon, they punched and kicked him when he refused to show them the photos. One of the group carried an extendable baton which was used to beat him. Nattaphon sprinted into the nearest McDonald’s for safety reasons.

“I was lucky to wear a helmet, otherwise I would be in worse shape.”

Benpakorn, a member of a group called Vocational Students Protecting the Thai Monarchy, admitted to being one of his attackers. He offered Nattaphon 5,000 baht to compensate for the assault. Nattaphon refused the offer and wanted to take the case to court.

“I am consulting a lawyer to find out what else I can do to bring the perpetrators to justice. It shouldn’t just end in the police station, but in court with due process.

In a livestream on Sunday, Benpakorn admitted beating Nattaphon. He alleged that he was defending himself when he attacked the photographer.

“He asked me why I was looking at his face, and I said ‘Why not me?’ I saw that he also had a fanny pack that could hold a weapon, so I had to protect myself.

The Thai Journalists Association said it was monitoring the case as it was more than just a personal attack and called for those involved to be prosecuted. Police say they know the identity of the attackers, but they have not been arrested.

Watch the video of the attack HERE.

THE SOURCE: Coconut | The standard