Photographer Captures Aurora and Pillars of Light in Epic Self-Portrait 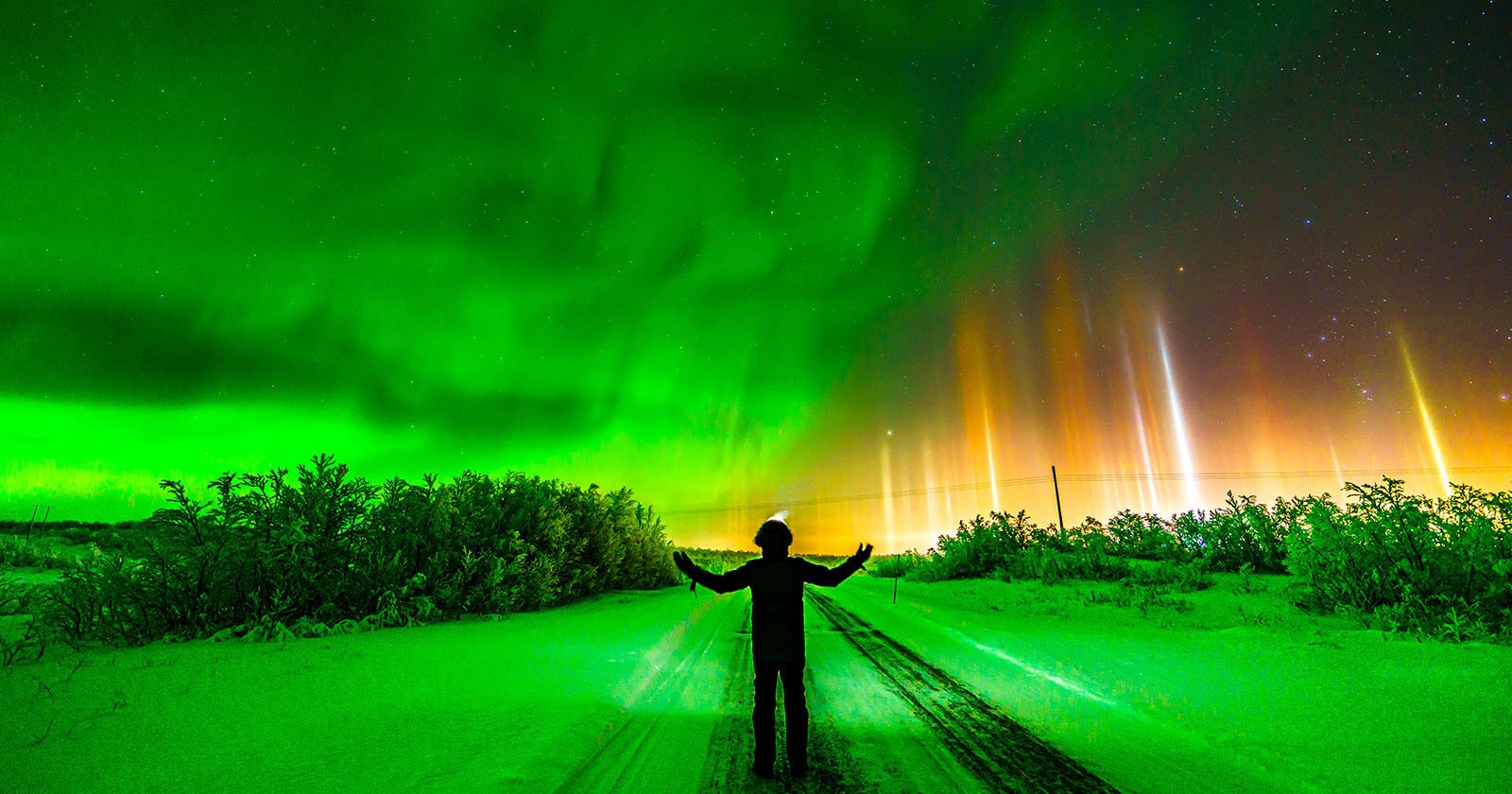 A Brazilian photographer in Norway has captured a rare photo in which two dazzling night sky phenomena, the Northern Lights and the Pillars of Light, are seen in the sky at the same time.

47-year-old photographer Alexandre Correia was near Kautokeino, Norway, on the night of February 8 when he was treated to the light show in the sky and horizon.

“A few hours before total darkness, I decided to put on some extra clothes and better socks and a heated belt for my lens to prevent freezing,” Correia explains. “I was taking pictures mostly looking to one side as the lights were stronger but on the way back I noticed the city lights forming like glowing pillars and saw a great opportunity to take a unique photo.”

“It was like a Marvel movie or something from the Norse gods.”

Kautokeino is the coldest town in mainland Norway in terms of annual average temperature, and is known to be a great place to view the Northern Lights. As temperatures dipped that night to -18°C (-0.4°F), conditions set the stage for auroras and pillars of light.

Correia stood in front of his camera and captured a beautiful self-portrait of himself in front of the view. Her outstretched arms in her parka figure give her the impression of directing a symphony of plays of natural light.

The Northern Lights can be seen with their green swirls on the left side of the sky while colorful columns of light fill the horizon on the right half of the frame.

“I am new to [post-processing],” the photograph said. “So not Photoshop, but Lightroom to increase exposure, brightness, colors and shadows.”

The Science Behind Auroras and Pillars of Light

Auroras appear in the night sky (usually in locations closer to the Earth’s poles) when the solar wind, charged particles ejected from the solar corona, strike the Earth’s magnetosphere and excite molecules based on oxygen and nitrogen. This causes photons to be emitted and the resulting light show can have varying colors and intensities depending on different factors.

Light pillars, on the other hand, appear closer to home – they form when light from various sources is reflected from falling ice crystals in the air. These beams of light extend above and below their light sources, and with strong enough sources, they can reach quite far into the sky and be observed at great distances.

“The light pillars are caused by the interaction of light with the ice crystals, cold weather is a must, so each flake acts as a tiny mirror that reflects the light sources that are correctly positioned below,” explains Correa. “The presence of flakes at varying altitudes causes the reflection to lengthen vertically into a column.

“The larger and more numerous the crystals, the more pronounced this effect becomes.”