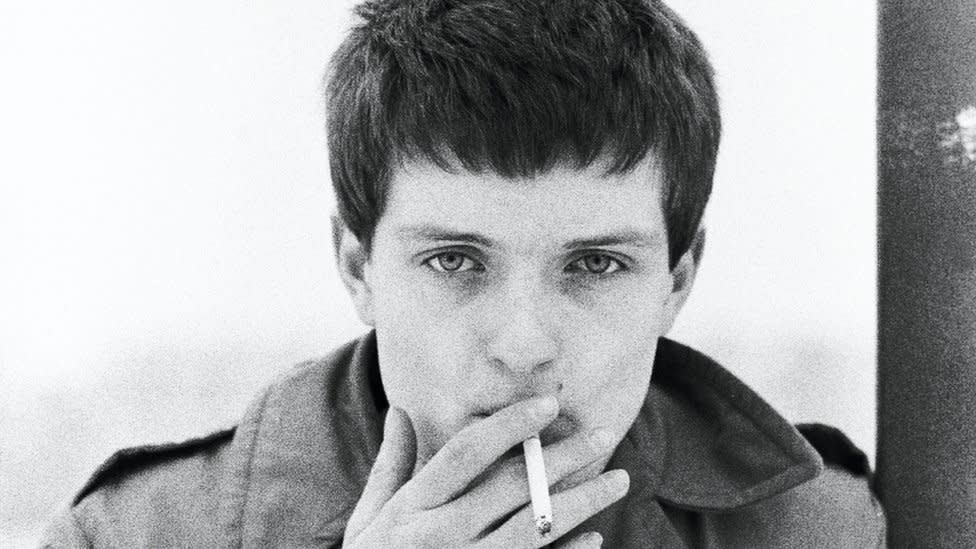 In 2002, music photographer Kevin Cummins was approached by a young woman after giving a talk in Manchester.

He didn’t immediately recognize her, but it was Natalie Curtis, the daughter of the late Joy Division singer Ian.

She wanted to ask a simple question: Did Cummins have pictures of her smiling father?

Cummins photographed Joy Division in the late 1970s, and its atmospheric imagery came to define not only the band, but the post-punk music scene of industrial Manchester as well.

When the singer committed suicide at the age of 23 in 1980, the famous black and white stills took on an even greater resonance. The images are now published in Joy Division: Juvenes, an updated collection of his work with the group.

But despite Natalie’s request for a memory of her father’s happier side, Cummins had deliberately given the footage a dark vibe. He explains that he “very rarely” took pictures that captured the group when they were all smiles.

“That was not the order of the day. I wanted to photograph the group looking like serious young men,” he says. “If they were smiling in a photo, I usually didn’t take it because I couldn’t afford to waste a movie.

“I wanted … to create an image for them so that people would look at them and think that maybe they were a lot more cerebral than they were and made them slightly inaccessible.”

This month marks the book’s first mass audience release, after an edition limited to just 226 copies in 2007.

While the images are important to fans of the group, they hold special personal significance to Natalie Curtis, who grew up knowing her father’s power as a leader in part through the work of Cummins and other photographers.

“Even when I was little I knew the band and I knew my dad was the singer, but seeing the black and white prints spread out on the carpet made me tangible,” she wrote in thoughts reprinted in the delivered.

While Joy Division “becomes fiction”, in her own words, notably as in 24 Hour Party People in 2002 and the biographical film Control in 2007, Natalie explains that she has come to “enjoy the solitude of the photographs”.

“The images contain an unexpected tenderness, the group captured on their own terms by someone who understood their world.”

Few photographers could claim such a close relationship with the group as Cummins. His images of the group reflected their sound and embodied the steely vibe of the time – cold, but decidedly resilient.

It was modern rock “seen through night vision goggles – grainy and cloudy”, wrote Bob Stanley in his book Yeah Yeah Yeah: The Story of Modern Pop.

This is perhaps reflected in Cummins’ most famous Joy Division shots, taken on the icy Epping Walk Bridge above Princess Parkway in Hulme, Manchester, in the winter of 1979.

“In a way, we were lucky,” he continues. “The cold and the snow helped me a lot because I did half the session indoors, but half we did it in the snow, which resulted in a more graphic and crisper quality. as if it had been a typical Manchester gray day. “

While Cummins has a style in mind, the power of the images means they have taken on a life of their own in pop culture. “I don’t define what becomes an iconic image,” he says. “The audience really defines that, because it then becomes the image that people want, share and feel.”

Referring to the photo of this snow-covered viaduct, he continues, “Iconic is an easy word to use, but it’s a defining image of this group. And it’s the image most people think of when they think of it. at Joy Division. “

His haunting snapshots with Cummins became synonymous with the group image, making him a true standard-bearer of the raw emotional vulnerability and turmoil of the group’s sound.

“He was a good person to photograph because he did what I asked him to do,” recalls the frontman’s photographer.

“He understood the process and it was easy to work with him. No one is the singer of a band if they are shy and reluctant. Singers have ego, bands all have ego, otherwise they would go up. not on stage.

“I want people to be themselves and I want to get something out of that. Maybe it’s something they don’t always see in themselves.”

A series of solo portraits of the singer, taken from the snowy set of Parkway, show him with an intense gaze, cigarette in hand, against a worn Manchester background.

“Ian in this photo has a really piercing gaze, because he’s looking at me, he’s not stopping his gaze in front of the lens.”

Forty years later, Cummins’ work has become something of a time capsule. “I’ve always photographed for now and wanted to capture something of that moment, which is why I like to use city backgrounds and cityscapes. Because it gives a sense of time,” says- he.

“Then over the years, when retrospectives take place and when birthdays come into play, that really sets them at that point is quite significant historically. So in addition to filming for now, you can film so that the ‘history somehow remembers them. “

Location and the surrounding culture are key to Cummins’ work – almost as important to the photo as the band itself. This is particularly the case of the snapshot of the snowy bridge, which will later adorn the cover of the group’s Best Of compilation.

“What I was trying to do with this shot was maybe just put them in the context of the city. And have an almost architectural image, where the band was a complement.

“But you look at this picture, and you know what this band will look like.”

More recently, Cummins explains, he revisited the deck to reflect on how things have changed since his original photoshoot. Last year he took a photo of the bridge while looking at Manchester, “to show how the city has developed since then”.

“Manchester was a pretty dark and unappealing city that people wanted to leave pretty much as soon as they were old enough,” he says. “Now people are moving to Manchester and want to leave [to its] academics from around the world. In 1979, they didn’t. “

“It just shows the contrast and begs the question… if Joy Division had met and formed in 2020, would their sound have been a different sound?”