Photographer meets doctor who saved his life at basketball game 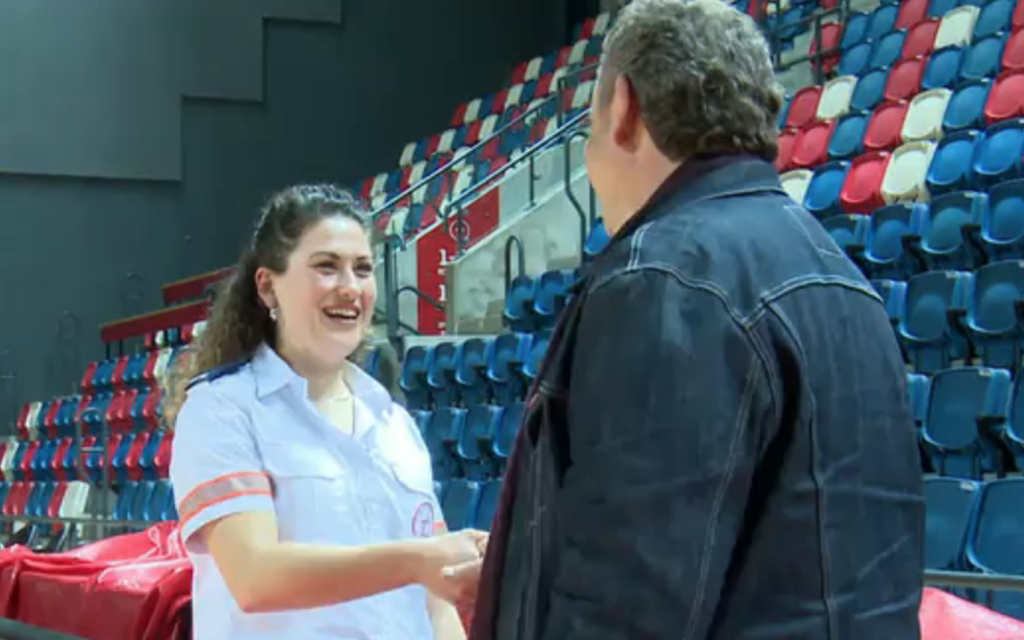 A man who nearly died in a basketball game has found the cold-headed doctor who brought him back to life using a defibrillator and thanked her for saving him.

Ilan Weinstock, the official photographer of the Hapoel Jerusalem basketball team, was overwhelmed with emotion when he again came face to face with Gal Trommer at the same Shlomo Group Arena in Tel Aviv where the dramatic events happened two and a half weeks ago.

“How are you?” Trommer asked Weinstock before the two shook hands and then kissed, Channel 12 reported Tuesday.

In CCTV from the night he suffered cardiac arrest, Weinstock can be seen entering the basketball court shortly before a game between his team and hosts Hapoel Tel Aviv.

Weinstock recalled feeling “terribly dizzy” as he moved along the sideline. He leaned against a rail in the stands for support before collapsing seconds later.

At just 53 years old and with no pre-existing medical conditions, her heart had stopped.

From that moment, there were only five minutes left to save his life, even with cardiac massage.

Officials and bystanders rushed to help, but a team of Magen David Adom paramedics who were deployed at the game did not reach Weinstock until two minutes later.

In video of the incident, Trommer, 23, can be seen walking towards the group around Weinstock as some hold towels around the fallen man to give him some privacy.

As soon as she realized what had happened, doctors rushed to bring in a defibrillator, a lifesaving device that uses electrical impulses to restart a person’s blocked heart.

With some 750 people in the crowd watching, Trommer got to work and after a minute and a half Weinstock regained consciousness, a rare occurrence because even after the heart restarts most patients remain unconscious until that they receive hospital treatment.

Weinstock said his remarks to Trommer were the only part of their first meeting he remembers.

Channel 12 hosted the reunion on Tuesday to mark National Public Deliberator Awareness Day, which was sponsored by MDA, the National Lottery, the Center for Local Authorities and the Defi website. [Hebrew] which allows users to see where the nearest defibrillator is.

There are thousands of deliberators positioned in public places across the country. The machines are designed to be easy to use, even by an untrained audience. If a person collapses, those nearby are advised to immediately call MDA on its national emergency number 101. If the call center deems it necessary, operators can direct callers to the nearest defibrillator and explain how to use the device.

The machines also speak pre-recorded commands, in Hebrew, guiding users through operating steps, including warning them when they should stay away to avoid receiving an electric shock as well.

If a person has severe dysrhythmia, the defibrillator is probably their only chance for survival. Every minute that passes without the heat restarting, even with cardiac massage, the chances of survival drop by 10%. After five minutes, the chances of surviving without significant brain damage are zero.

If so, we have a request.

Every day, our journalists aim to keep you up to date with the most important developments that deserve your attention. Millions of people rely on ToI for fast, fair and free coverage of Israel and the Jewish world.

We care about Israel – and we know you do too. So today we have a question: show your appreciation for our work by join the Times of Israel communityan exclusive group for readers like you who appreciate and financially support our work.

You are a dedicated reader


We’re really glad you read X Articles from The Times of Israel over the past month.

That’s why we started The Times of Israel ten years ago – to provide discerning readers like you with must-read coverage of Israel and the Jewish world.

So now we have a request. Unlike other media, we don’t have a paywall in place. But since the journalism we do is expensive, we invite readers to whom The Times of Israel has become important to help support our work by joining The Times of Israel community.

For just $6 a month, you can help support our quality journalism while benefiting from The Times of Israel WITHOUT ADVERTISINGas well as access Exclusive Content only available to members of the Times of Israel community.

Thank you,
David Horovitz, founding editor of The Times of Israel