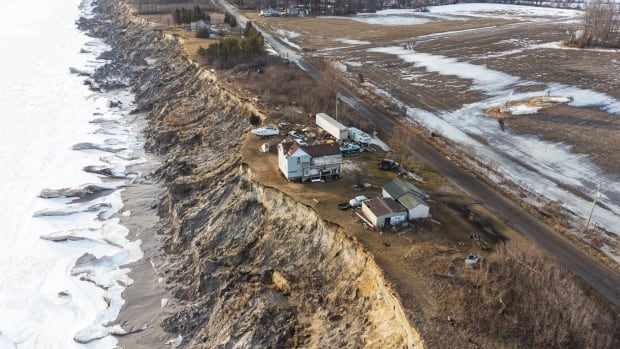 Since 2019, David Piano has used his considerable photography skills to document soil erosion along the north shore of Lake Erie.

Focusing on a nearly 200 kilometer stretch of lakeside from Port Burwell to Wheatley, he captured images of crumbling cliffs and cottages engulfed by lake water eating away at the shore.

Lake Erie’s soil erosion problem is not new. For years, landlords have lobbied governments and spent thousands of dollars fighting erosion that threatens buildings, many of which are seasonal cottages that have been owned by families for decades.

But this week, Piano felt compelled to tweet about what he sees as erosion accelerating this winter. He says some properties that were on solid earth when he photographed them in November have since yielded 10 meters or more to water in the space of a few months.

“We get these huge chunks of bluff that come off,” Piano told CBC News. “There are basically these waterfalls of mud coming out from under the edge of the cliff and eroding from below. You keep having these pieces coming off, and that process seems to be accelerating.”

Piano, who is also a storm watcher, uses a drone camera to capture his footage. The drone allows him to rotate the camera over the water and shoot down properties where erosion is occurring.

A new and concerning aspect of erosion: it draws waste from affected properties into the lake.

He has seen items left outside on properties – including tires, scrap metal, propane tanks and vehicles – fall towards the lake as the ground beneath them erodes.

“We’re looking at huge toxins,” he said. “By the time March and April roll around, it will be in the waters of Lake Erie.”

Municipalities along Lake Erie should ask homeowners to remove objects from the edge of cliffs so they don’t end up in the lake, he said.

CBC News contacted the Lower Thames Valley Conservation Authority (LVTCA) for comment, but did not hear back Thursday.

This stretch of coastline is governed by six small municipalities.

Duncan McPhail is the mayor of West Elgin, which includes the riverside community of Port Glasgow.

1/5 The north shore of Lake Erie is in a state of extreme crisis. On Monday I visited the same spots I spotted in November and found the bluff had eroded another 20-30 feet in just 3 months. Unprecedented erosion rates cause large parts of the property to succumb to the lake #lakeerie pic.twitter.com/kxYJmondEs

Although he is well aware of the challenges caused by shoreline erosion, he said it was the first time he had heard of it causing litter to fall into the lake. He said he was ready to look into the issue, but said that when it comes to shoreline issues, the LVTCA is the competent body.

It would be difficult for a small municipality with limited resources to control what happens on private property, where the shoreline is often above the beach and away from the road, McPhail said.

In a statement, the Municipality of Dutton Dunwich said it had amended its official plan in response to shoreline erosion – for example, adding new shoreline setbacks for buildings – in response to advice from the province and the conservation authority.

In the meantime, Piano will continue to document coastal erosion with his photographs. He plans to eventually bundle his work into a video documentary titled On the edge. He hopes it will expose a wider audience to a problem he calls “an environmental crisis”.

He expects erosion to continue to worsen with the onset of spring, when rains and warmer weather will further soften the soil.

“I’m sure the erosion will reach an even more alarming crescendo in March and April,” he said.