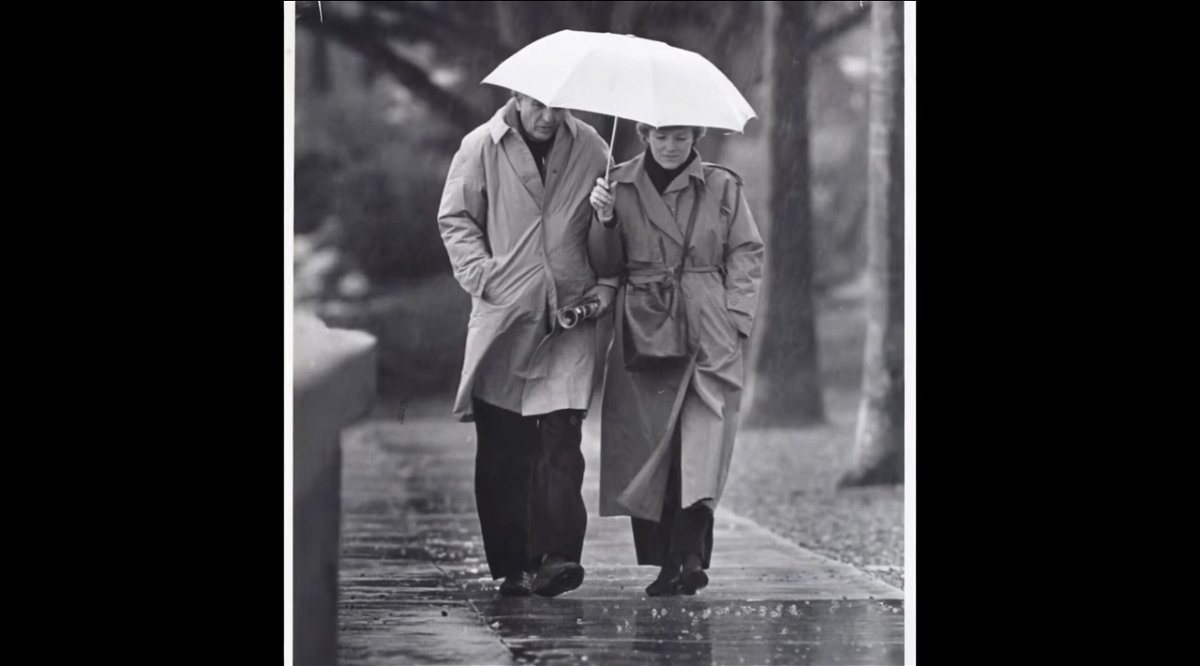 SANTA BARBARA, Calif .– Every picture tells a story. The one captured in Santa Barbara from a Hollywood couple says two. It also includes all the drama you would see on the big screen.

Mike Eliason was a photographer for the former Montecito Life newspaper when he took the photo.

â€œIt was a rainy afternoon and I was almost 18 at the peak, maybe 19,â€ Eliason recalls.

It was a rainy day in Montecito in January 1985. And along the south coast of Santa Barbara, the rain made headlines.

â€œSo most of the papers, when the weather is nice, want people to be in the rain or the elements,â€ Eliason said.

â€œWe went out, it was raining heavily,â€ said Barbara Marshall. “And we thought, well, there’s no one here and we look terrible. You could see that I have like a knit beanie. I never wear a hat. And I didn’t know that. we were going to have our picture taken. And I had no idea it would be on the front page the next day. “

Mike Eliason is currently a public information officer for the Santa Barbara County Fire Department. And when he was a teenager, he worked at Montecito Life while attending Santa Barbara City College.

â€œYou go where the people are,â€ Eliason said. “So I was here at [Butterfly Beach], here looking for someone. And there really was no one on the beach. And I looked at the path and they come here walking towards me.

What Eliason didn’t know, who these people were walking towards him 200 yards away. It was the director of “Happy Days” and “The Odd Couple”, Garry Marshall, with his wife Barbara.

Eliason said there is still a long way to go to take the perfect shot. â€œTrying to make sure the exposure is correct and reduce the depth of field. So all these little things that you try to go through in your head in a millisecond as you try to frame the shot and sort of come up with an image convincing.

“I think if he had taken the picture from down there and just left, it wouldn’t have been the front page of the newspaper,” said Barbara Marshall. “It wouldn’t have been exciting or something you would have kept. But he kept coming closer until he recognized Garry. And that’s when he was so nervous, he was so scared. “Oh my God,” he said. “I’m so sorry. Oh Mr. Marshall, I’m so sorry.

Eliason also didn’t know why the commissioners were there. Or why their faces were wet with tears rather than rain.

â€œWe left home,â€ Marshall said. â€œLeft our children at home with our cleaning lady. And I went to Santa Barbara to cry and try to collect our thoughts on our financial situation that we had just discovered two weeks before Christmas.

Barbara said their business owner got them into a bad real estate deal in Pasadena, costing them more than $ 6 million, $ 15.5 million in 2022 and nearly bankrupting them.

â€œGarry, I needed to cheer him up. But it was a tough sell, â€Barbara said.

The image Eliason captured captured a major turning point in the life of the Marshalls. They were trying to figure out how to solve their problems while still in Hollywood. Garry started making more movies, starting with â€œBeachesâ€ and then â€œPretty Womanâ€. And like a Hollywood fairy tale at the eleventh hour, they were saved.

â€œA man entered through the back door of Garry’s office,â€ said Barbara Marshall. â€œHe said, I heard you have a property that you would like to get rid of. The next day was the day we filed for bankruptcy.

To celebrate, the Marshalls met in Santa Barbara for a sequel.

â€œWe all dressed neatly and with a smile and she took the picture,â€ Marshall said. â€œIt was a beautiful sunny day and we were all very happy. And we had to have this photo. So these two photos are in my living room.

The first photo is so important to the Marshalls that it became the cover of Barbara’s new book which talks about her life in Hollywood, including those difficult times.

And for Mike Eliason, he too has released a new book and he still captures the stories of Santa Barbara, one frame at a time.