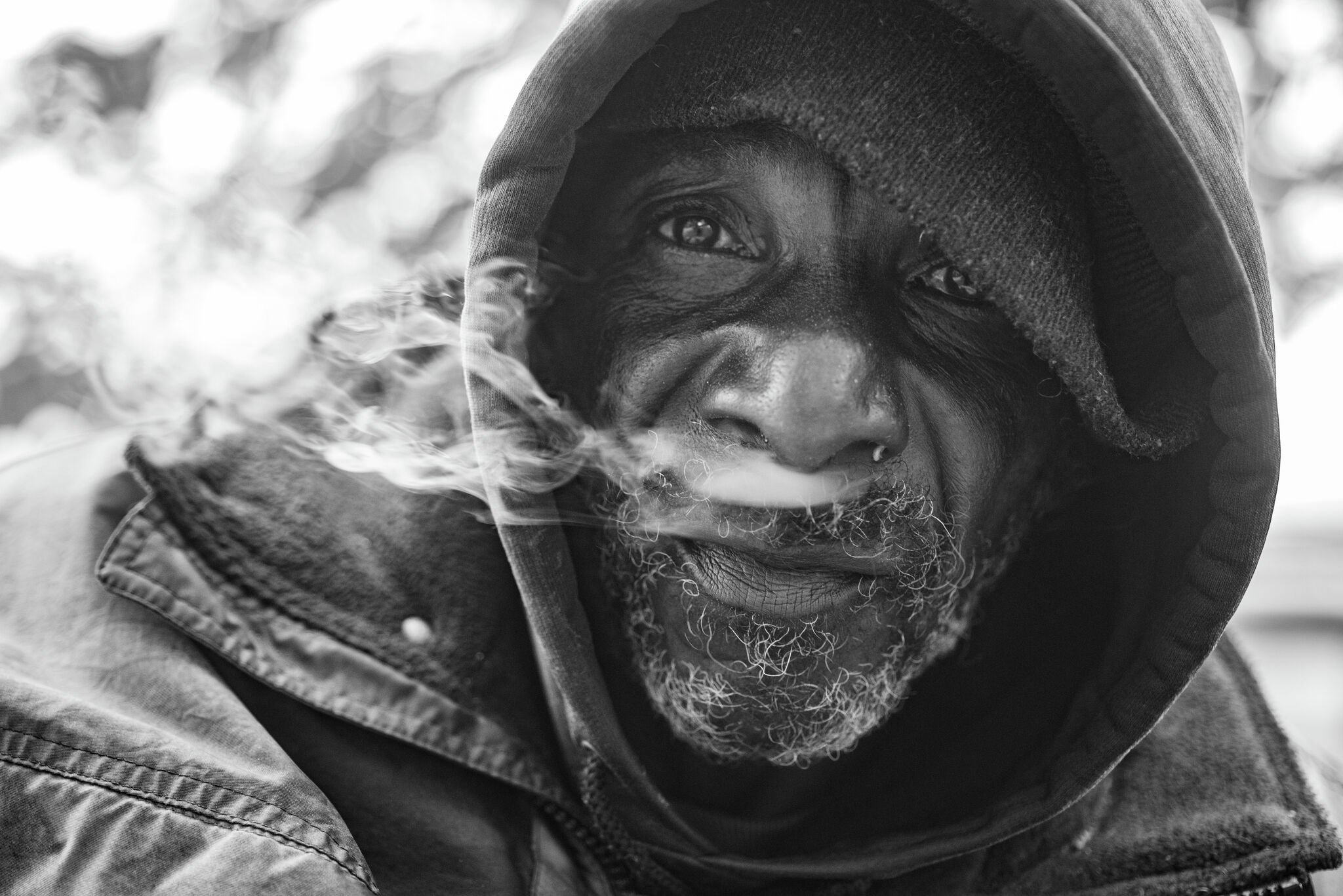 Harry Williams Jr. hopes his photographs will create a human connection to the many faces we often pass without a glance on the streets of San Francisco.

“I want people to see the people they might ignore every day they pass without recognizing them,” he explained. “I want my photos to feel like they’re going to breathe on you, that tactile feeling like you can touch them and they can touch you.”

Walking the streets of SF, Williams travels light, carrying only a camera with a 50mm or 60mm lens. Like any great portrait, his images capture the faces of his subjects and their personalities.

“Social realism would best describe my work, I love interacting with my subjects, so I get these intimate close-ups,” Williams noted. “I love seeing this beautiful light catch people’s eyes making them sparkle.”

Williams grew up in rural Ohio and found her love for photography while taking a course in college. “As soon as I saw my images in the darkroom, I was hooked,” he said. “I graduated with a BA in photography from Ohio State University.”

After graduating, Williams sold everything he owned besides his camera and traveled extensively through Southeast Asia for a year.

“I started doing street photography when I traveled in Southeast Asia. The more I traveled, the more I was attracted to people and discarded objects that seemed to have a soul or a life”, did he declare.

When Williams finished his travels in 2002, he moved to the Bay Area.

Williams found that every time he photographed the streets of San Francisco, he discovered something new.

“I find I’m so much more aware of everything that’s going on around me when I’m walking. I kind of step into another zone,” Williams said. “Often I only take a few photos and then maybe three or four portraits, but when everything lines up with beautiful light and a person’s hands look like a sculpture, I’m so happy to go home. home and start editing.”

Williams said her style of photography was influenced by Dorothea Lange, particularly her sensitivity to her subjects, as well as Frank Capra.

“Capra because I love his quote that if a shot isn’t good enough, you’re not close enough,” he notes. “I love finding and seeing things that are discarded and giving them new life by photographing them. I think that’s why I love photographing people who are neglected.”

Walking the streets of San Francisco, Williams finds that carrying only a camera with a small lens makes it much easier to approach the people he wants to photograph.

“If I see someone interesting that I want to photograph, I just say hello or give them a compliment on how good they look in the light,” Williams explained. “It’s really very organic, and a lot of people feel comfortable with me, I think partly because I just look like a tourist. I don’t wear multiple lenses or a telephoto lens and I stand from the across the street and I try to sneak a picture. My approach is to get to know them a bit and then maybe get a portrait if they’re comfortable.”

Williams often had to be within feet of her subject to create her intimate portraits. “That means to get the footage that I get, I have to talk to people to get as close as possible, and people also have to feel comfortable with my proximity,” he said. “Almost all of my photos are uncropped, and I’m getting closer and closer.”

After taking the photos, Williams often finds her subject to be generally very grateful and happy to be recognized.

“Some people will tell me I’m the first person to stop and talk to them in days, or some will say they haven’t had their picture taken since grade school,” said Williams.

Besides her intimate portraits of people’s faces, Williams also focuses on their hands, inspired by a childhood memory of her grandfather.

“I feel like hands are like portraits; they say so much about a person without even seeing their face,” he explained. “When my grandfather was dying, I remember seeing his hands tied to the bed so they wouldn’t fall off. I was little, and they were at my eye level. They were swollen with all kinds of wrinkles and of deep scars. He was a veteran of World War II, and I remember that sight of those huge, strong, lifeless hands that I just looked at and told the whole story of his life. I don’t I will never forget this image of his hands.

“When I go out to do photography, I’m not just looking to photograph homeless people. I really let it be organic,” he said. “I think most homeless people are probably sitting in a particular place, so it’s hard to talk to someone if they’re walking past you. I’ve stopped people if I really want them photograph, but usually it has to be in the right light and background.”

After walking the streets for four years, Williams often crosses paths with the same people and sometimes takes their portraits.

“Once a homeless man asked me why I wanted to photograph him. He said, ‘Look at me.’ I replied, “You are just beautiful in this light. Your eyes light up.” He then asked me how much money I make taking pictures, and I said I do it for art, and when I see a beautiful subject, I just want it. capture,” Williams said. “The man started crying. He was probably in his late 60s. It was a very emotional moment for me.”

“San Francisco is so great for that. I love walking from Mission to Chinatown. One moment might be a lowrider show, then maybe a drag show in the middle of the Tenderloin,” Williams said.

“It really is an amazing place because you never really know what you’re going to see, but you’re always going to see something interesting,” he added.

Williams is also hosting a photo exhibit called “Serendipity” at Foreign Lens in North Beach for the first Friday of May 6. “The show isn’t about street photography. It’s simpler abstract organic shapes that I find on the beach after I’m done surfing,” he said. “I always wonder if the pieces find me or if I find them. I always thought of myself as an artist and not really a photographer. The camera is just a tool. Before moving to San Francisco, I’ve done a lot of mixed media work, printing images in the darkroom on beer cans.”

As for his street photography, Williams is also currently working on compiling his images into a book called “Eye See You” which he plans to publish in the fall. “So currently I’m looking for a gallery or space to partner with. A portion of the proceeds from the book will go to a local charity.”

You can follow Harry Williams Jr. on instagramand see more of his work on his website: harrywphoto.com