Reverend Marshall Blalock feels the weight of his new responsibility.

The South Carolina pastor is vice-chair of a newly formed Southern Baptist Convention task force to oversee an investigation into how a high-level faith-based committee handled allegations of sexual abuse, a review which comes years after the SBC relied on the scandal.

Blalock believes the task force’s work, launched in June by a Southern Baptist vote at a nationwide rally, could be a fundamental part of how the SBC approaches the issue going forward.

“If the task force does what the convention has asked us to do, if the executive committee responds favorably, I think we are taking huge first steps to really prepare for the future in terms of prevention, appropriate response and care for survivors of sexual abuse, ”said Blalock. .

The sexual abuse scandal was put in the spotlight in 2019 by a landmark report by the Houston Chronicle and San Antonio Express-News documenting hundreds of cases in Southern Baptist churches, including several in which the alleged perpetrators remained in the ministry.

Appointed by new SBC president Ed Litton, the seven-member task force of pastoral, legal, advisory and advocacy professionals is tasked with overseeing an outside firm’s investigation of the allegations that the executive committee mismanaged cases of abuse, resisted reforms and intimidated victims and defenders.

“We are fed up with abuse, and we have to face it,” said Litton, who was elected in June amid divisions over race, the role of women in the church and how to address the issue of women. abuse, during a recent event. “But I also think a clear message has come out that this is not a witch hunt. That this is an opportunity for us to lead the way for the future.”

“It’s about finding out the truth so that we can face it,” said Reverend Bruce Frank, pastor of North Carolina and chair of the task force.

The executive committee welcomed Guidepost’s selection, noting that it is the same investigative firm it had planned to use before the formation of the task force.

“We look forward to meeting Guidepost again to quickly coordinate our activities in support of their important work,” the committee said in a statement this month.

Jules Woodson, a church sexual abuse survivor based in Colorado Springs, Colo., Remains suspicious but is hopeful that significant change may be coming for the SBC. She was encouraged after meeting the task force, she said, and is ready to engage with Guidepost even though she is still skeptical of the company.

“It is so difficult as a survivor to put faith, hope and trust in people and processes and in a system that has continually failed us,” said Woodson. “For the first time in ages, we are finally seeing steps in the right direction. ”

She said she cried with joy when directors of the Ethics and Religious Freedom Commission, the public policy arm of the SBC, recently indicated that the ERLC was willing to conduct an assessment of sexual abuse within of confession, and has a plan in place to figure out how to do it.

“The evil of abuse must continue to be fought,” Brent Leatherwood, acting chairman of the commission, said in a statement. “As we have said before, our churches must be safe for survivors and free from abuse.” 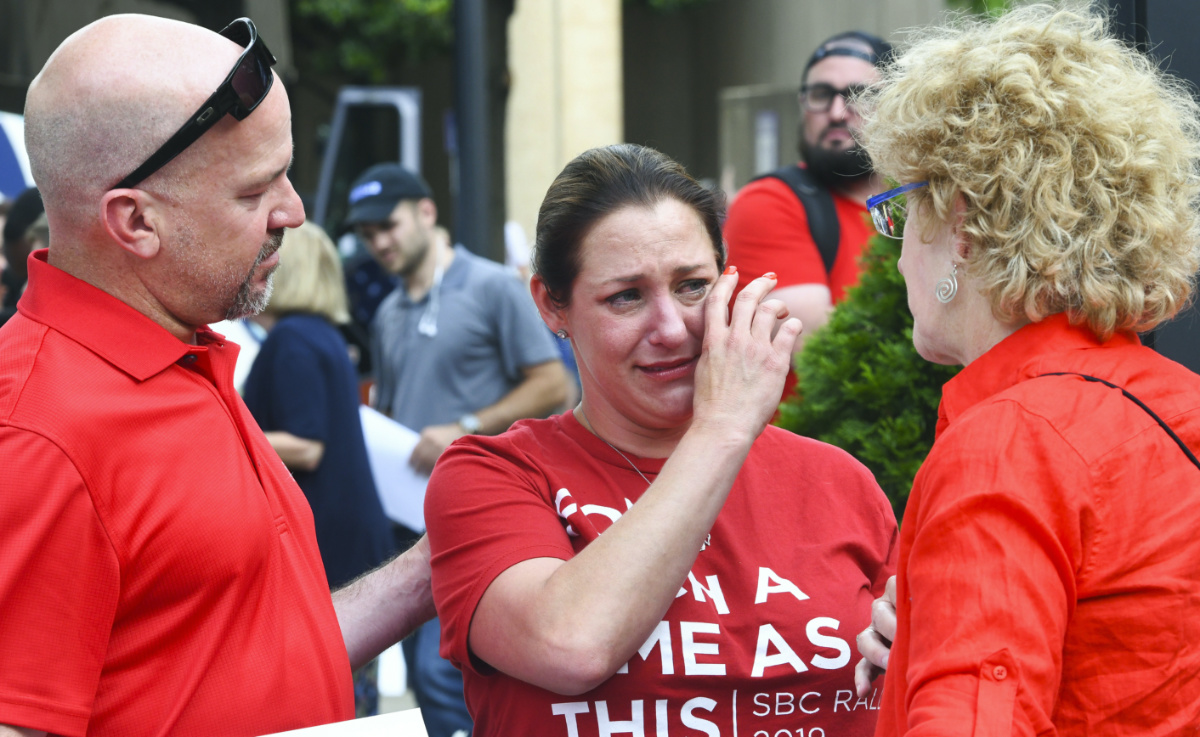 In this Tuesday, June 11, 2019 file photo, Jules Woodson, center, of Colorado Springs, Colo., Is comforted by boyfriend Ben Smith, left, and Christa Brown during a protest outside the annual meeting of the Southern Baptist Convention in Birmingham, Alabama. First-time attendee Woodson spoke through tears as she described being sexually assaulted by a Southern Baptist pastor. PHOTO: AP Photo / Julie Bennett / File photo.

The motion approved by delegates at the June meeting directed the working group to accept the standards and best practices recommended by the third-party investigator, “including, but not limited to, executive committee staff. and members waiving solicitor-client privilege to ensure full access to information and review accuracy.

Frank, the chairman of the task force, sent a formal request for waiver of privilege on August 2, calling it “critical to ensuring full access to relevant information, full accountability and transparency, and proper assessment of the stages of the privilege. reform”.

The executive committee did not make a commitment in its statement, but said it is not opposed in principle to such a request and “speculations to the contrary are internet rumors and false.” waiver problem.

Executive committee chairman Rolland Slade said he supported the request as it is the will of the members at the June conference: “We have a duty to carry out and observe the wishes of the messengers.

Attorney and attorney Rachael Denhollander, who is one of two advisers to the task force, said identifying, recognizing and acknowledging the truth is crucial to making meaningful and effective change.

“If the executive committee decides not to waive the privilege, then they send a clear message that they reject accountability and transparency,” Denhollander said.

Woodson said not all would be lost in such a scenario, but responsibility would once again fall on the survivors.

“How many times,” she said, “do we have to introduce ourselves and tell our stories over and over again? “