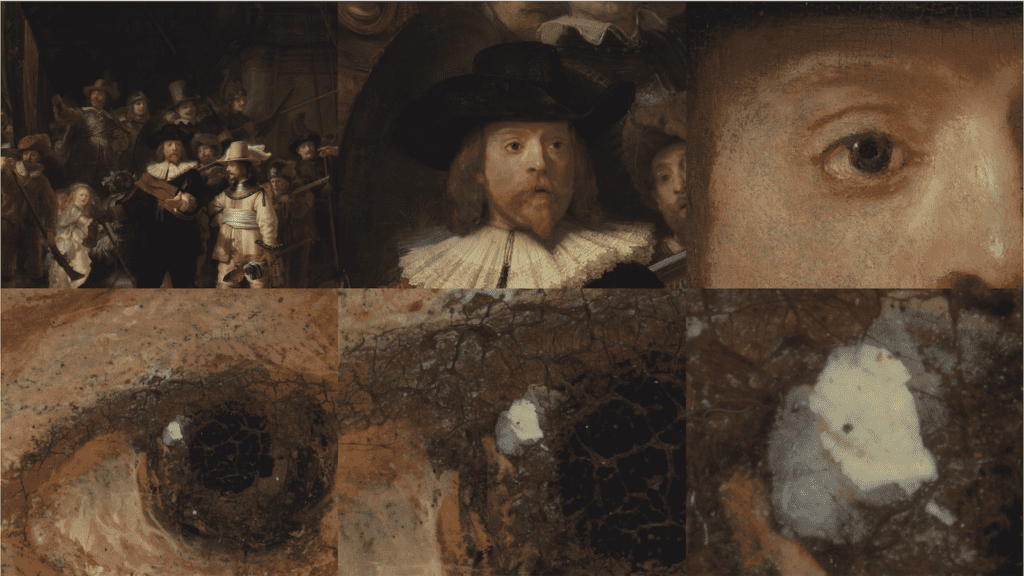 Researchers working on Operation Night Watch have once again succeeded in pushing the boundaries of what was thought possible. This exceptional achievement will greatly facilitate work on The Night Watch. January 2022 will see the start of the conservation phase of Operation Night Watch. The front of the painting will not be visible for a short time, but thanks to this image, the public will be able to continue to admire Rembrandt’s masterpiece in great detail.

This photograph of Night watch has a resolution of 717 gigapixels, or 717,000,000,000 pixels, making it the largest digital image of a work of art ever. Each pixel represents an area of ​​5 micrometers or 0.005 mm square, and the complete composite image is made up of 8,430 individual photographs measuring 5.5 cm x 4.1 cm. Artificial intelligence was used to stitch these small photographs together to form the final large image, with a total file size of 5.6 terabytes.

Making this image was a big challenge. There were a lot of people who thought it was impossible, and who thought the Operation Night Watch team were crazy to even try it. We have gone above and beyond in what can rightly be described as world class achievement.

This image is four times sharper than the photograph of Night watch that the Rijksmuseum published on its website in May 2020. This image measured 44.8 gigapixels, with each pixel representing an area of ​​20 micrometers or 0.02 mm squared. This new image allows scientists involved in Operation Night Watch to study the painting from a distance in even greater detail. It will also make it possible to follow future aging processes with even more precision. This photograph is so crisp that neural networks can now be used to quickly detect similar pigment particles or identify lead soaps, for example, which was not possible with the previous photograph.

The depth of field for each individual photograph was only 125 microns, or 0.125 mm. To ensure that each image was sharp, it was first necessary to scan the surface of the painting with lasers and calibrate the camera very precisely. After each photograph, a neural network was used to check the color and sharpness of the image.

The second phase of Operation Night Watch begins on January 19, 2022, when the first procedures will be performed on the board itself. The first task will be to climb Night watch on a new stretcher. This is necessary due to the “warping” of the canvas, especially the clearly visible ripples in the upper left corner. Although this problem requires immediate attention, it is easy to fix and will not impact the future of painting. After that, we’ll take a step-by-step approach to determine if further preservation treatments need to be done.

Operation Night Watch is the largest and most extensive research and restoration project in the history of Rembrandt’s masterpiece. His goal is to keep the painting for the future in the most optimal way possible. Work began in the summer of 2019 and takes place in a specially designed transparent glass chamber, allowing the visiting public to follow the process. Operation Night Watch takes advantage of the latest and most advanced research technologies and techniques available, and involves collaborations with experts from AkzoNobel – the Rijksmuseum’s main partner for Operation Night Watch – as well as museums, universities, university hospitals and research organizations in the Netherlands and abroad.

the A 717 gigapixel image is available to display: HERE