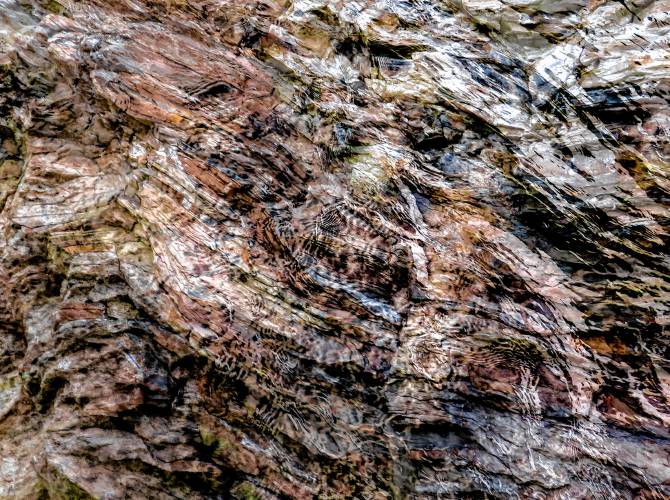 Traveling the world, Shelburne Falls photographer Rhea Banker delves deep into the land she photographs for inspiration, spending time learning about the culture, history, and people of the region who live there. interested.

Banker is an award-winning photographer and book designer. After living and working in New York for 30 years, she has now established her base in Northwest Massachusetts. She found inspiration for her photography in the geology of remote regions of the Earth, and her interests have taken her to the Svalbard Archipelago near the Arctic Circle, along the west coast of Greenland, Scotland, to Copenhagen and south to Buenos Aires.

This latest exhibit places Banker in the place she now calls home, New England, with photographs that represent her immersion in the country right here. In his photos, Banker captures breathtaking views of natural landscapes, stone faces, glaciers, oceans, and the reflections that blend where land and water meet.

â€œThe creation of Earth is an ongoing process,â€ Banker said in a press release for the exhibit. â€œAs the stone, sea and sky interact with the inner energy of the deepest layers of this planet, each player in the dance is constantly changing. As ice and rivers carve the earth, as rocks change with heat and pressure, each substance finds a new path and a new direction.

Exploring the riverbeds of New England, where “meltwater shapes and carries pieces of ancient mountain peaks to the sea,” Bankers says one can “witness changing shapes. , changing textures and the divergence of the present from the past “.

“These images reflect my impressions of the energy released at the meeting points of rocks and rivers, where a vulnerable Earth charts every path and every next step,” Banker said in the statement.

Much of his work is based on ancient movements recorded in the earth’s crust and maps of imaginary lands. His textured abstract images are his reflections of these movements and reveal his own attempts to understand and share the stories contained in the landscape.

â€œIn the bedrock of this planet there are untold stories of history, continental journeys, coastlines that bear witness to it all,â€ Banker writes on his website, rhea-banker.com. â€œMy job is to capture these untold stories by focusing on the smallest details contained within the earth’s crust. I explore the geological features, worn surfaces and glacial intrusions that reflect this ongoing transformation.

Using macro photography as a starting point for his prints, Banker said her goal is not to document the physical, but to share her intuitive response to these ancient and current stories.

â€œDivergence: Shaping the Land,â€ can be seen July 2 through August 29 at the Salmon Falls Gallery in Shelburne Falls. The brick and mortar gallery will be open five days a week, Thursday through Monday, 11 a.m. to 5 p.m. The gallery’s exhibits can also be viewed virtually through the online store. A reception for the exhibition will take place on Sunday July 11 from 2 p.m. to 4 p.m. with music by saxophonist Loren Feinstein.

In addition to Banker’s photographic work, she is a professional book designer. His designs have won numerous awards and have been exhibited several times at New York Bookbinder exhibitions in New York.

A graduate of the State University of New York at Buffalo, Banker received her BFA in design and a bachelor’s degree in art history. She has taught undergraduate courses in medieval art history as well as in the history of photography. She is currently based in Shelburne Falls.