Trackside Photos: A Great Northern Steamboat, an Iowa Interstate Railroad Crossing, a Zephyr on a Bridge, and more. 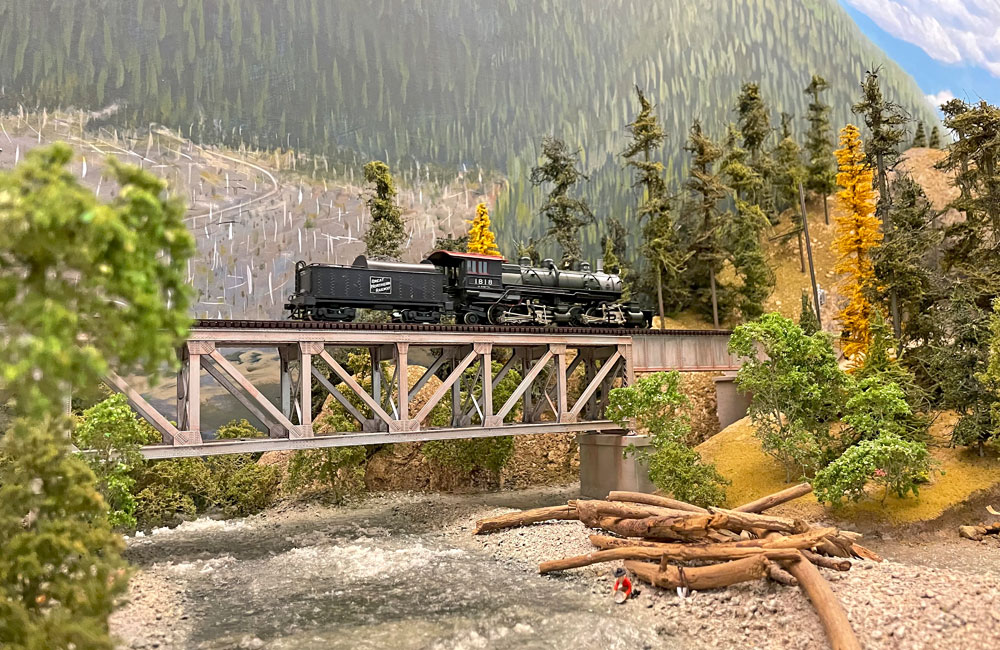 A model railroad photo gallery of the April 2022 Model Railroader

Great Northern class L2 2-6-6-2 no. 1818 drifting down after providing helper service over Stevens Pass for eastbound freight. The mountainside provided plenty of lumber for expansion into the Puget Sound area, a boon to the James Hill Railroad. Bill Kajdzik of Kent, Washington photographed the HO scale scene of Peter Murphy in the Great Northern Cascade Division layout. The locomotive is a custom painted brass model from United Models.

Iowa Interstate no. 708 drives the ICSW-25 train across US Highway 6 in Iowa City. James McNab of Des Moines, Iowa, filmed the action on The Hills Line, his HO scale version of the Iowa Interstate’s Hills Industrial Spur. He used Helicon Focus software to increase the depth of field and Adobe Photoshop to replace the background and illuminate the road crossing turn signals. James documented his network construction in “The Hills Line with James McNab” video series for Trains.com.

the Rio Grande Zephyr crosses Faith Canyon Bridge in Colorado en route to Caribou Pass. Tim Schreiner’s HO Scale D&RGW Faith Canyon Road was inspired by Colorado’s prototype roads of the mid to late 20th century. Tim made the aspens from Scenic Express SuperTrees frames and made the plaster boulders from molds and sculpting them by hand. The locomotives are Athearn Genesis models and the bridge is made from Micro Engineering parts. Tim, from Roland, Okla., also took the photo.

As the calendar stretches into the fall, the brief moment of the “soft light” of sunset comes earlier each afternoon. Happen to catch a pair of Central Vermont and Grand Trunk Geeps coming out on the trestle at Chatham Gorge today. John Ciesla of Mineola, NY didn’t have to wait for perfect lighting conditions to take this shot on his HO-scale Eastport branch layout, which premiered in November 2021 Miniature railwayman. The locomotives were undecorated “blue box” Athearn models which John tweaked, painted and weathered.

Baltimore and Ohio Mail Train #29 isn’t a usual sight at the Fairmont Yard, but a wreck last night caused this detour. Class T 4-8-2 no. 5501 slows down to pick up orders at the triage desk while L-2b no. 1682 constitutes a mine course in the yard. Bruce Elliott of Green Bank, W.Va., photographed the scene on the HO scale layout of the Pocahontas County Society of Model Engineers in Green Bank. The 4-8-2 locomotive was built from scratch by the late David Grover.

Send us your photos