Wedding photographer shares sexist things men do to her 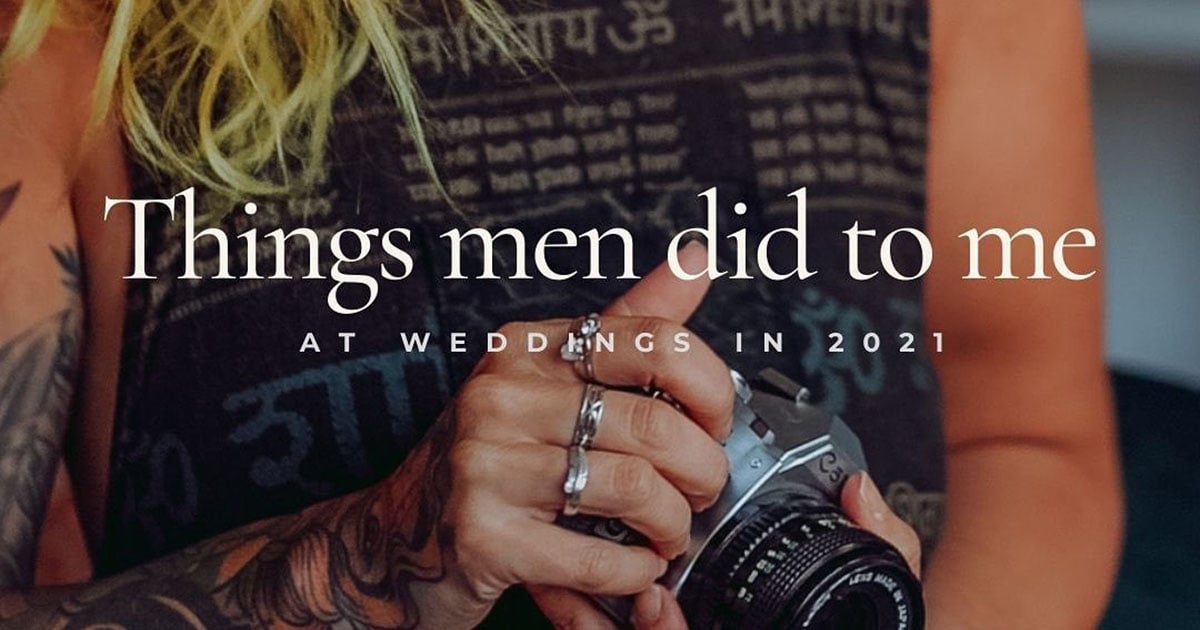 Wedding photography is already physically and emotionally demanding work, but one woman talks about an aspect of her job that is rarely discussed: varying levels of abuse and sexual harassment on location.

Kim Williams, wedding photographer and videographer based in Brighton, UK, took to Instagram to share some of the negative experiences her work has brought her over the past year. Although it was a difficult topic to talk about and Williams felt her clients would be “mortified” to know it had taken place, she felt she needed to speak up to start the conversation about the treatment of salespeople. marriage like her.

In short, she says that regular instances of harassment are commonplace.

In one particularly disturbing episode, Williams was physically assaulted while wedding guests were dancing.

“Working in a job that requires you to be around large groups of cis-het men and booze means this stuff happens in about 80% of the weddings I photograph,” she wrote in her Instagram post. . “I was grabbed by the neck on the dance floor after two guys harassed me more and more all day, I ran outside, I breathed through a panic attack, I came back to pull off the rest of the night five minutes later with a smile on my face and nobody’s wiser… ‘what can I do?’

Along with physical and verbal abuse, touching without consent, regular requests for her phone number, and inappropriate questions about her personal life, Williams has also been shunned as a professional, especially when working alongside a male colleague.

Because of their job, wedding photographers feel the need to “smile and bear” when it comes to situations like this, as the feeling is that their work could be damaged beyond repair by “making a scene” .

A wave of support and similar stories

As Williams’ story began circulating on other Facebook accounts and groups, men and women spoke about their experiences. From inappropriate or condescending comments to physical attacks by guests. Some even cite experiences with the wedding.

“What really shocked me was the scale of the abuse; ranging from ‘can I have your number?’ during speeches, to physical violence on the dance floor,” writes photographer Sam Docker. “I’ve heard similar stories from friends before, but never realized how often women encounter these occurrences – almost at every wedding.

Stories shared by Williams and other photographers show that vendors’ experiences often go unnoticed and are often buried to ensure a smooth wedding for the couple. Even though wedding photographers and videographers are passionate about their work, just like Williams, a dream career can turn into a nightmare.

Williams started the hashtag #handsoffwedding so other wedding photographers can use them to share their stories with the world.

She also shared a series of posts, giving advice to couples on how to make their marriage a safe place to work and how other men, whether guests or vendors, can help prevent or resolve difficult situations. She also shared a template for a harassment clause that suppliers can modify and include in their contracts.

Williams calls on the men to help solve the problem

Williams says that after talking to her non-binary girlfriends and friends, she’s come to the conclusion that this problem is “not our problem to solve.” Instead, she hopes her openness about the uncomfortable and abusive encounters she’s been through will encourage men not to be bystanders.

“Call him when you see him,” Williams says. “Ask the women and non-binary people in your life about their experiences with this. Listen. Actively engage. It’s not enough for you to be ‘one of the nice guys’. If you don’t help not actively solving the problem, then you are part of it.

“Misogyny is not a women’s issue,” Docker writes. “IT’S A MEN’S PROBLEM.

“It’s time to start calling this out, to stop turning a blind eye, to stop ignoring inappropriate comments made as ‘jokes’. This is not banter, it never was banter. It is time to start breaking the silence and no longer be a spectator of such a culture of peers.

Because Williams has spoken about her personal experiences in such a public forum, many believe it has already helped give a voice and instill courage in photographers who are willing to share similar experiences and speak out against bad behavior. Undoubtedly it will take time for attitudes and behaviors to change but at least it started a long overdue discussion.

“I can’t wait to post this and want to reiterate that I LOVE my work,” Williams wrote. “I love all the weddings I work on and the one I talk about in the previous paragraph was one of the most fun weddings of the year, the most gorgeous clients, a dream day to photograph!