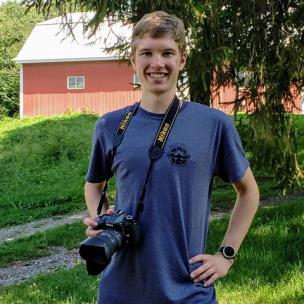 Andrew Keller, a 19-year-old schoolboy who has been taking photos since the age of three, released a 2022 calendar of scenic views of the Chattanooga area.

He says, “My Mawmaw (Marilyn Struthers) loves calendars, but she had a hard time finding one with scenes from Chattanooga. I noticed the same thing – there aren’t many Chattanooga calendars.”

He made arrangements with a printer in Fort Oglethorpe to produce the calendar.

Andrew says: “From an early age I showed a keen interest in photography. When I was three, my dad bought me a huge, old camera at a garage sale. I still loved it.

He switched to an iPhone 3, then a little red Olympus point-and-shoot camera was under the family Christmas tree in 2011. Using that camera, he started making greeting cards and sold them for a dollar each.

In March 2014, he received his first “real camera”. His grandmother and grandfather Struthers gave him their old Nikon D40xDSLR as they had upgraded to a newer model. In December of the same year, it switched to a Nikon D7100. He got a deal at $ 940.

Andrew bought his first drone last year and is now an FAA certified drone pilot. Some of the photos in the calendar were taken using the drone.

He also dabbled in videography and he can edit photos on metal, acrylic or canvas.

Ordering information for the calendar can be found at ISOneedphotos.com.